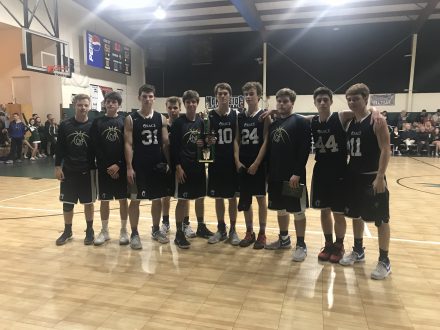 GCA makes it to finals at area tourney

On Friday, both the Cougars and Lady Cougars defeated Emmanuel to advance to the finals on Saturday, where both teams ultimately lost to Northside Methodist.

Leading the way for the Cougars against Emmanuel was Sam McRae with 23 points. He went 5-of-8 on 3-pointers and also pulled down 9 rebounds.

Behind McRae was Jared Duke with 9 points, De’Andre Rogers with 8 points and Clay Wells and Seth Parker with 6 points each. Rogers also had 8 rebounds.

The Cougars led after each quarter, scoring 17 in the first quarter, 13 in the second quarter, 19 in the third quarter and 7 in the fourth quarter. GCA won 56-39.

Against Northside Methodist, McRae led the team in scoring again with 19 points.

Behind him was Wells with 10 points, Smith with 6 points and Parker with 5 points.

The Lady Cougars beat Emmanuel last Friday 38-18 off a big scoring night from Caroline Wells and Emellia Woodrum, who had 13 points and 10 points respectively.

Behind them was Andrews with 6 points and McRae with 4 points. McRae had a strong night with rebounds, grabbing 10 to give the Lady Cougars the edge around the basket. Andrews also had 8 steals.

A halftime show is the wrong way to go

It was just announced Tuesday that the College Football Playoff Championship Game will feature a halftime performance from Kendrick Lamar,... read more