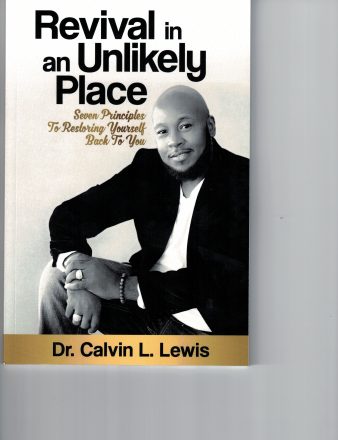 Bainbridge minister Calvin Lewis made a mistake in 2013 that completely changed his life and relationship with God for the better, although he never realized it until recently.

It was April Fool’s Day, and Lewis decided to pull a prank on a co-worker. He called her and told her he had been kidnapped and was being held captive. Thinking nothing of it, Lewis went on with his day. That evening, investigators in Thomasville contacted him and asked him to come in for questions

After an interview, he was sent home, only to be called back a few days later and charged with filing a false report and making a false statement.

“I shouldn’t have ever done that,” Lewis said.

Lewis was handed probation and a large fine. His name as a minister and man of God was tarnished, his life’s work shot down in flames with it. He felt ashamed.

“For 24 years at that time, I had been traveling doing ministry, making friends,” Lewis said. “This incident destroyed all of that. Even as a leader that knew better and knew God, I didn’t want to live.”

After a suicidal incident, a miracle happened. Lewis heard a voice.

“I plainly heard, ‘I’m not going to allow you to die because you still have a story to tell, you still have an assignment to fill’,” Lewis said. “What kind of work can I do? I finally realized after some time that it’s not about me, it’s about all those that have gone through this.”

Lewis sat down at his computer and began writing. He has now published four books, each going into the trials and tribulations we face every day, and how to overcome them.

Most importantly, he tells people not to give up.

Lewis has sent his books to hundreds of inmates and to battered women’s shelters. With a changed view on how to spread the word of God, he started looking in unlikely places to help others, which led to the title of his most recent work, “Revival in an Unlikely Place.”

“In a crazy way, God has a way of putting us in situations that we feel like are hurting us, but they are helping someone else,” Lewis said.

Above all, Lewis has been humbled.

Those interested in hearing Lewis preach can visit New EDEN International Ministries at 2550 Old Whigham Rd. every Sunday at 4 p.m.

Christmas bird count to be held Thursday by Audubon Society