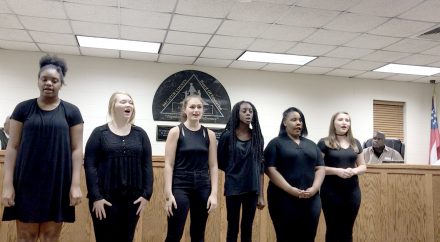 During last Thursday’s Board of Education meeting, the board had the pleasure of hearing the Bainbridge High School acapella group, Cat Call, who was a smashing success.

Leigh Powell is the new BHS choral director and started the group after students approached her and said this was something they wanted to do. Powell was ecstatic because it was something she wanted to do as well in high school, but never could.

“I always wanted it at my high school and now I have the ability to create something from nothing,” Powell said.

The group currently has six members who meet on Tuesday and Thursday mornings for 20 minutes. Some of the members knew Powell from their drama class or chorus class; others would sing in church and wanted a new outlet of expressing themselves through music.

Powell puts together the harmony and helps the girls learn the songs by looking at the music they will perform. Next semester Powell hopes to teach the girls about chord structure in order to help them understand when they need to sound major or minor. She is confident by learning this they can become more advanced in their skill and become an independent music group.

Powell describes her chorus as more classical, but the acapella group sings a lot of pop and what one would hear on the radio. It is similar to that of Pitch Perfect she said.

While Cat Call does not currently compete, Powell said it is a dream for them to one day get to that level. Leon High School in Florida competes and Powell hopes to compete against them soon enough. She wants the group to perform for other students and the community and prove to everyone that music can be interpreted in one’s own way.

Powell always has an open door and invites any student who may be interested to join their group and come rehearse with them.