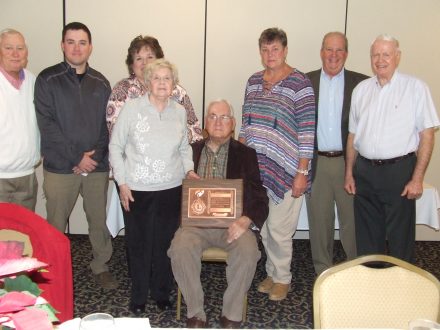 Beck recalled how Zorn became a Lion when past club president Don Hall, who worked at Elberta Crate, asked him to join the club in 1979.

“Mark graduated from West Bainbridge High School in 1957, in a class of 24,” Beck recalled. “After high school he went to South Georgia College in Douglas and Chipola Junior College in Marianna, Florida for one year.”

Reviewing Zorn’s financial career, Beck recalled how he was assistant manager of Dixie  Finance for about eight years and worked with CIT, the largest financial company, for 14 years, first in Bainbridge and later in Tallahassee.

Cotton Hester recalled how Zorn received numerous outstanding Lions awards through the years. They included the Melvin Jones Fellow, the Lion of the year and the Distinguished Service Award.

Hester also recalled how he, Zorn and other Lions sold  mops and brooms from door to door for several years.

To celebrate the month of November as Peanut Butter Lovers Month, the Georgia Peanut Commission hosted a PB&J Party on... read more