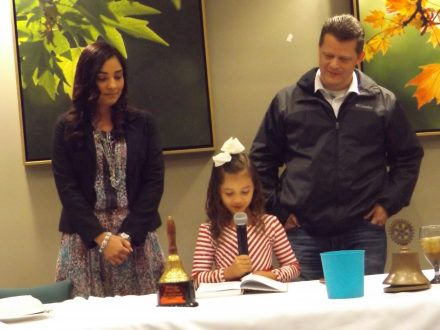 Homeschooling was the topic at Rotary meeting this week

Tony Cooper, his wife Viviana and their six-year -old daughter Gia explained to Rotary members on Tuesday how their family homeschools their four children.

Viviana grew up in Western Mexico and met Tony when he was on a mission trip to her area. They have been married 17 years. Spanish and English are both spoken in the home.

They began the education of their older two by enrolling them in the public schools, then moved then to Grace Academy before making the decision to homeschool.

In an attempt to explain their reasoning, Tony said he began to realize he was spending more time training his workers and being with them than he was with his children. “It is my responsibility as well as my wife’s to spend more time with my children.  Everything we do we can teach our children.” He went on to explain how they can include them in so many things in everyday life. They are able to take the children to work seminars in cities, such as Philadelphia, and can go on vacations in the off-seasons.

Viviana said she became concerned when her children came home from public school describing some of the age inappropriate things their classmates were doing.

She began to wonder about homeschooling and whether or not she could do it.

“I was already spending about 3 hours a day helping them with homework.”  She reasoned that by adding a few more hours a day, she could be teaching them at home.

As she had some experience teaching at a private school, she thought she could try it for a year and see how it went. “I don’t see any way we will ever go back to the old way now,” she exclaimed.

The two took turns speaking about the curriculum available. They use one with three levels of structure, beginning with the basics, then moving on up. Saying they use a lot of outside resources, they also take advantage of community groups of homeschoolers who get together every Tuesday for science experiments, arts and music. The children also receive socialization at their home church.

One big benefit of homeschooling is that you can move at the rate of the comprehension of the child. “The point is to understand it. You stay at the same level until they do,” explained Tony.

Viviana said her biggest fear was they wouldn’t get enough education; but her children are tested the same as in the public schools and they score as well.

Tony told how he facilitates a group of older students studying Latin who meet at his workplace.

They also explained how in Georgia there is an agency that keeps track of  transcripts and issues certificates of graduation for home schooled students that are accepted by most universities.

By way of demonstration, six-year-old Gia then read a book aloud to Rotarians on how God created the world.

A variety of emotions were felt Wednesday afternoon when Memories Car Club presented patients at Bainbridge Health and Rehab with... read more