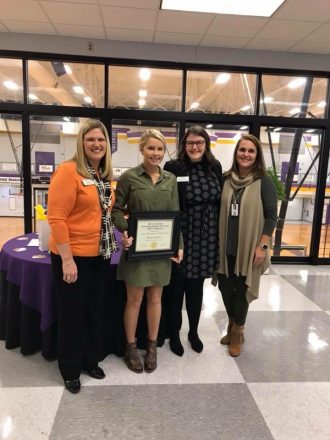 Madison Toole, her mom, Hope and dad, Jeff were in for a shock Monday morning. The family originally thought they were going to Bainbridge High School to discuss their experience over the past four years. When they entered, they were surprised to see Mercer University representatives. The representatives were there to award Toole the Bessie Willingham Scholarship.

Toole was taken aback when she walked into the room and was greeted by Erin Lones, the Director of Tift College Programs, Sarah Armstrong, admissions counselor and Mercer alumnae, Dr. April Aldridge along with family and friends.

One of the Tift College Scholarships was the Bessie Willingham Scholarship. The scholarship is in honor of a woman who attended Tift College when it was merging with Mercer. The goal is to give to a young a woman who is striving to advance her education and gives back to the community.

Toole felt at ease during her interview and talked about the woman who influenced her most, her grandmother. She said it was a comfortable conversation and realized her answers aligned with that of what the directors were looking for.

The Tooles believed it would be a month before they heard anything about the scholarship, but almost one week later they heard the best news yet.

“I was really surprised,” Toole said. “58 people applied, and out of 58 I was the only one chosen.