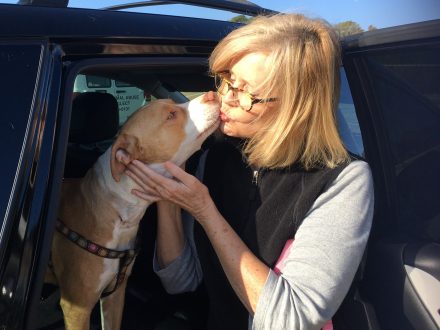 31,682. That will be the number of animals that have crossed paths with Beth Eck when she leaves her job as Director of the Bainbridge Decatur County Humane Society on December 31, 2017.  In 2001, Beth along with several other citizens, formed the Humane Society. During this time, the city still took all stray animals to the “pound” where they were euthanized every 5 days. In 2004, Beth, along with the other citizens, came to an agreement with the city to allow the Humane Society to take over the city pound and entered into a contract for all stray animals of Decatur County to be brought to the BDCHS for their care. In 2008, Beth resigned from her current job to take on the role of Shelter Director.

Life changed for all strays when Beth Eck took charge.  In the 10 years of Beth’s leadership, thousands have been adopted, reunited with their owners, and transferred out to other rescues in several states.  Through the many programs initiated by Beth, including Spay & Neuter education, the animal intake has decreased steadily each year.  Beth’s idea of the ‘River Cats & More’ campaign is an ongoing volunteer- based program that catches and sterilizes cats that inhabit Cheney Griffin Park, then releases them back into their environment. Beth also started a Spay & Neuter assistance program where citizens of Decatur County can apply for assistance based on their income.

“We have some very big shoes to fill” said BDCHS President Dennie Nichols.  “Beth has trained her staff to carry on just as they have always done. Beth, has put our shelter & Decatur County on the map in the ‘Rescue World’.  It is my goal, along with the Board, to carry that reputation forward, but we know that people like Beth Eck are one in a million.  Beth always does what’s best for the animal. Beth would never leave the Bainbridge-Decatur County Humane Society if she didn’t feel confident that we will continue with the same devotion and compassion for the animals that she has given for many years.  I would like to see Beth Eck recognized during the month of December. She would love nothing more than for former shelter animals to stop by for a visit.”

The Bainbridge-Decatur County Humane Society will continue operations as usual, Monday-Saturday from 11 a.m. to 4 p.m., with Ashley White being Shelter Director and Marnie Johns being Animal Director.

For the first time since anyone can remember, 11 Bainbridge downtown merchants have come together to extend holiday shopping hours... read more