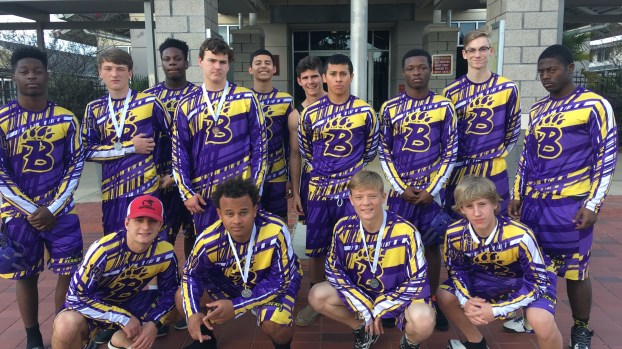 The wrestling team stands with their medals after a hard-fought meet.

This past weekend the Bearcat Wrestling team traveled to Florida High to compete in the Cam Brown Classic Invitational.

The tournament was formally called the Seminole classic but renamed after Cam Brown a 195lb wrestler for Florida High from 2015-2017 that was diagnosed with bone cancer that ultimately took his life this past year. Teams that participated were; Yulee High, Lincoln, Leon, Florida High, Godby, Bainbridge, Raines High, Bozeman High, Rocky Bayou and Rickards high.

“I was very surprised how crisp and quick we got out there with only one week of practice and wrestled very well,” coach Chad Smith said. “We had wrestlers out of weight class to fill spots like Tre Storey who weighs 205 but wrestled the 285lb class. He went 7-0 while beating two state placers. Tre is the favorite to win a state title at 195lbs class this year. He is pre-season #1 after finishing 5th last year at state.  Tanner brown was up a class and went 3-2. Tannner is one of our 3 seniors this year and we expect alot our of him this year. Another senior was Curtiss Watson also wreslting up a class that went 5-1 at 152. Kendall Glover turned on th offense and went 5-1 as well but missed placement due to tie-breaking rules. Kendall is a wrestler that missed state last year by one win. We expect a good state run out of him this year as a 10th grader. Thomas Davis finished the tournament with only one loss as well and like Kendall he is expected to do big things this year. Other wrestlers that showed great improvement were Carsen Love, first year wrestlers Josh Bruce, and Anthony Granados.

The Bearcats are headed to Cook County this coming weekend to participate in the Cook Hornet Invite.