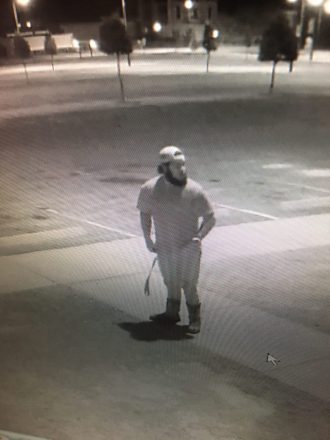 Kelley told Esquivel that sometime during the evening of Dec. 4, Austin Pippins went to the Bill Reynolds Sports Complex pavilion where the restrooms are located and damaged the women’s bathroom door and lock.

Pippins can be seen in a surveillance video exiting his vehicle and walking to the pavilion. Pippins first kicked women’s door one time then proceeded to kick the men’s bathroom door and the women’s door several more times. The damage to the door and lock is estimated to be $200.

“Way more good happens than bad at the Recreation Authority,” Kelley said. “The bad just costs us money and time to repair.”

After viewing the surveillance footage, Investigator Esquivel contacted Pippins and told him he needed to speak to him in regards to the damage that occurred on the evening of Dec. 4. Pippins agreed to speak with him at his residence.

While meeting with him, Investigator Esquivel explained to Pippins that a warrant would be obtained for the damage to the restroom door and Pippins stated he understood and would do whatever he had to do.

Investigator Esquivel obtained a warrant on Dec. 6 and contacted Pippins to arrest him. He was charged with interference with government property.

Kelley assures all parents that although this took place, Bill Reynolds Sports Complex is still a safe place to bring their kids for every event. He believes the surveillance cameras played an integral role in catching the perpetrator, and he is glad they installed them and were able to catch him.

Lofton Willis and his friend could be seen sitting in their “Old Rusty” truck Monday afternoon while watching Bainbridge Hardware... read more