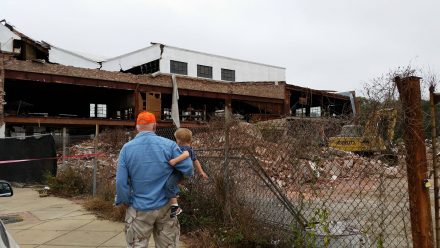 Lofton Willis and his friend could be seen sitting in their “Old Rusty” truck Monday afternoon while watching Bainbridge Hardware get demolished as his granddaughter and former employees looked on.

Willis said he remembered the day it was built, but he hopes whatever comes next will help this side of town be the thriving place it once was. Willis was not the only one who was flooded with memories Monday. His granddaughter, Krissy Gwin-Hurst said she had 100 things running through her mind.

Gwin-Hurst was just a baby when her parents first started bringing her to the shop, she would play on the stairs or on the ramp out back. When she grew to be a little older, she started riding her go-cart around the store lot.

At 15, Gwin-Hurst started working at Bainbridge Hardware with Jessie Smith and Doc. She remembers her last day on the job; Rusty Grimes, Casey Davis and she closed up the shop for the last time.

For the next 10 years they would try to sell the building, but no offer ever seemed just right. However, Gwin-Hurst never expected to see the building torn down.

“I’m shocked,” Gwin-Hurst said. “I never expected it to be torn down. A lot of memories are being torn down with it.”

Gwin-Hurst is sad that her children will never be able to fully experience the building. She said her goddaughter got to spend the last year and a half before the store closed working there, and her kids got to help take stuff out before the building was torn down. Before the kids were able to go inside, Gwin-Hurst said she used to drive her kids by and say, “this is where I used to work.”

Tyler Inlow, a former employee of Bainbridge Hardware, was there to see the demolition. He joked around with Gwin-Hurst as they reminisced on old times.

“It’s heartbreaking to see this,” Inlow said. “We had a lot of good times here.”

Inlow and Gwin-Hurst said they used to let loose when Willis would get on his three-wheel bike and take packages to the Post Office.

They agreed Willis always had the biggest heart. They remembered the days when old ladies would bring in heaters and ask him to fix them, and even if he didn’t know exactly what to do he would always figure it out and help any way he could.