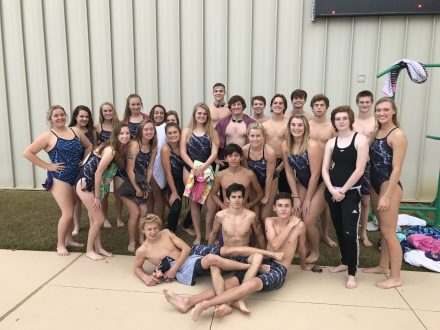 BHS Swim Cats off to the races this season

The BHS SwimCats have had a strong start to the season.

On Wednesday, Nov. 29, Bainbridge hosted a tri-meet with Thomasville High School and Thomas County Central.  The Lady SwimCats placed first and the Men SwimCats placed second, falling behind TCC by only two points. The combined team scores won the meet.

The SwimCats also had an impressive showing at the Dean Ferrell Invitational on Dec. 1. The Lady SwimCats placed second and the combined team placed third.

Individual high scorers were Haydn Griffin who won the 200 free and placed a close second in the 50 free, Dalton Savage who placed third in the 500 free, the Women’s 200 free relay of Sandy Baker, Emily Chambers, Sarah Kaylee Wynn and Katie Campbell placed third, and the Women’s 400 free relay of Alaiya Schuyler, Ashlyn Brock, Mary Mercer Reynolds, and Madison Toole placed third.  This was a larger meet and Coaches Chambers and Campbell are very proud of how well the team did.  The SwimCats’ next meet is Dec. 15 in Thomasville.

Once a Bama fan, always an Bama fan

The annual Iron Bowl rivalry started early this year, when my uncle started teasing me at my cousin’s wedding two... read more