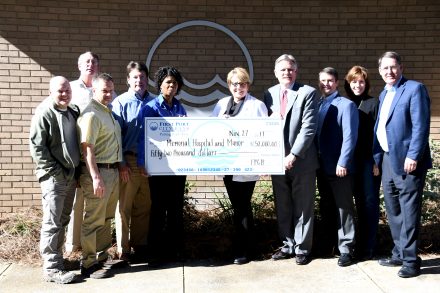 First Port City Bank provided Memorial Hospital and Manor with a check for $52,000 to upgrade the security system in the hospital’s baby nursery.

The new system would feature a band placed on each baby that would set off alarms if taken outside, keeping the babies contained. While the hospital doesn’t necessarily have a problem with babies leaving the premises, CEO Jim Lambert said this was a necessity and a precaution all hospitals take.

“Our system is just old and getting to the point where it won’t be supported anymore with the things that go on the babies,” Lambert said.

Lambert added that he believes the system can be upgraded by the end of the month. The hospital is currently shopping around vendors to find a quote that fits their needs.

“We have also talked about beefing up security with manor residents,” Hospital Authority Chairwoman Glennie Bench said. “As we have more and more people with memory issues, wandering. We may be able to do a better deal with a vendor that can handle both aspects of that. Those things are under consideration.”

What has changed for you in 2017? Did you start a new job or leave a job behind? Did you... read more