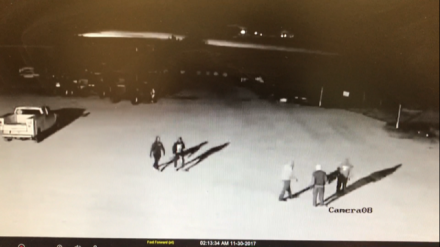 Ag-Pro gets hit with second burglary in two years

Wednesday night Ag-Pro Companies- Bainbridge had three gators and three zero turn lawnmowers stolen off their property from what appeared to be experienced thieves, with a well thought out plan.

Ag-Pro Companies manager, Kyle Vickers said the surveillance camera first picked up movement and activity at 11 p.m., when the scout vehicle appeared. The video then showed at least six men cutting the fence and later cutting the gate to enter the back lot. After cutting the gate, the men drove a four-door white Chevrolet with a utility body into the area and a white single-cab Dodge flatbed truck pulling a utility trailer.

The men used the ramp on their utility trailer to steal three brand new John Deere gators that amount to $15,000 each. They went on to also steal three zero turn lawnmowers that costs $10,000 each and a 2009 white extended cab Chevrolet delivery truck that had additional utility trailers hooked to it.

Vickers said he was shocked.

“I was in a sales meeting Thursday morning, when I got a call from one of the guys saying our lock was cut,” he said.

Two years ago the company faced a very similar incident, so this time Vickers knew what to look for first to see if anything was gone.

Vickers believes they had intentions to steal more, because of how prepared they seemed in the surveillance video. He thinks it may be a theft ring due to the amount of people who took place in the burglary.

Investigator Chip Nix said he does not think these men were local and they appear to have had experience burglarizing in the past.

“It was a very thought out theft,” Nix said.

Bainbridge Public Safety is currently working the investigation and following up some evidence and leads they have found. People are encouraged to call Investigator Nix if they have seen any of the vehicles or saw something suspicious the night of Nov. 29.

Ag-Pro Companies is additionally offering a $10,000 reward for anyone who can lead them to the identification of the men on video.

Investigator Nix also reminds everyone to be aware of his or her surroundings, especially during the holidays and to always lock their stuff up.

Tickets have been going fast for the Bainbridge Little Theatre production of Charles Dickens, A Christmas Carol, which was scheduled... read more