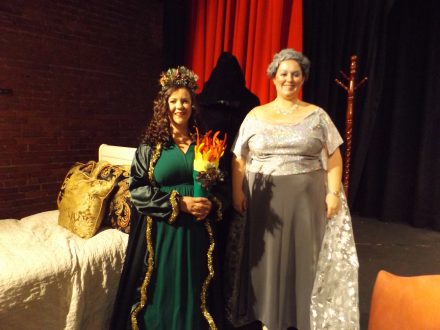 Tickets have been going fast for the Bainbridge Little Theatre production of Charles Dickens, A Christmas Carol, which was scheduled to open tomorrow (Thursday, November 30) at 7:30 p.m.

However, due to the illness and hospitalization of the leading character, Richard Whitehead, who plays Scrooge, the show has been postponed for one week.

Director of the production, Mike Inlow, said on Tuesday the decision had been made to postpone the show for one week to allow Whitehead to get well and back on his feet. Otherwise Inlow would have had to take on the role and memorize all those lines in a matter of three days. (That is a lot to ask of anyone, even anyone as experienced as Mike.)

So mark your calendars for Thursday, Dec. 7, Fri. and Sat. the 8th and 9th and Sunday. December 10. For those you already have reserved seats, those reservations will automatically transfer to the next week. Inlow said for those people who have conflicts and cannot reschedule, things will be worked out, perhaps with vouchers for upcoming shows.

This traditional version of the Dickens classic has many of our local favorite actors, as well as some newcomers from Quincy and Whigham. In addition to the role of Scrooge, the cast includes Curtis Robinson as Bob Cratchit, Krystal Carter is Mrs. Cratchit, Edward Moorehead is Marley and also Christmas Future, Henry Intili and Ida Cooksey take on The Fezziwigs, Jenna Chambless is the Ghost of Christmas Past, Rachel Crager is Christmas Present, and Lanie Gay plays Tiny Tim. Yes, Tiny Tim is portrayed by a girl in this production. These are just a few of the cast members. There are 27 in all, and several take on multiple roles.

This is the quintessential Christmas show, perfect for all the family to enjoy together as they start the Christmas season.