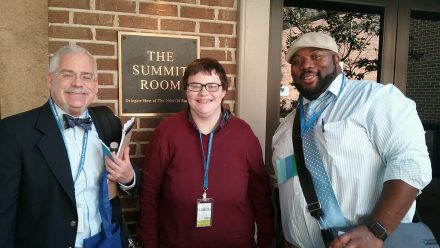 Bainbridge State College student Kim Dixon of Leary, Georgia, was granted the rare honor of presenting a research paper at the 2017 annual conference of the Georgia Political Science Association.  Approximately 200 leading political scientists and scholars from around the state and the world attended the conference, which was held November 9-11 in Savannah.

Only five undergraduates from the state of Georgia had papers accepted for the conference, and Dixon was the only sophomore student on the panel that otherwise consisted of seniors from research institutions.

Her paper, “Divorce Remorse: British Public Opinion in the Post-Brexit Election Era,” examined the evolution of British public approval since the historic referendum that signaled the United Kingdom’s departure from the European Union.

“It is very unusual for an undergraduate’s paper to be selected for presentation at these conferences,” said BSC professor John Vanzo, who mentored her through the process.  “For a community college student like Kim, it is nothing short of amazing.  Needless to say, we here at Bainbridge State College are all very proud of her.”

After the presentation, both the conference program chairman and the editor of GPSA’s official research publication also took time to personally compliment Dixon on her work, especially how she surmounted the methodological challenges she faced in the data.

For Dixon, enjoying the sights and cuisines of Savannah was as exciting as the conference itself.

She said,” I learned a lot about how to present research at the conference, and I got some good advice on some areas for future research.  I also connected with another professor in the state that is looking at the same subject.  My favorite part of the trip, though, was the food, especially the “Irish Nachos” we ate in a British pub.”

Dixon has plans to continue her education at Bainbridge State and aspires to eventually attend graduate school.

Shortly after the calendar flipped into 2017, the Board of Regents of the University System of Georgia approved the consolidation... read more