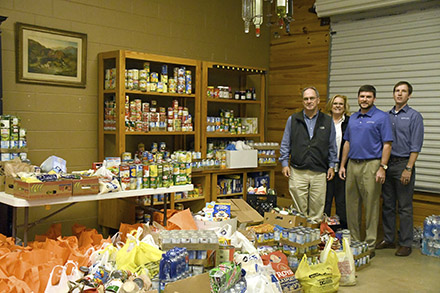 Family Connection Director, Ronnie Burke said the past two years the food drive has particularly grown due to the awards and prizes the bank gives out to the winners at the school.

“The spirit of competition inspires them,” Burke said.

This year John Johnson Elementary, West Bainbridge Elementary, Jones Wheat Elementary and Potter Street Elementary participated. The winning class gets a pizza or ice cream party and the teacher wins a gift certificate. The hospital hosts an internal competition, along with the City.

The competition proved to be a success, bringing in an estimated 10,000 pounds worth of canned goods this year.

First Port City Bank hosts multiple food drives throughout the year, but this is the biggest one that allows the food bank to restock and replenish what they have run out of.

Ann Brannen, food bank coordinator said in past years the food collected lasted about 4-6 months; however last year’s collection lasted though November of this year.

Most people don’t realize that the poverty rate in Bainbridge is really high, Burke said. The food isn’t just for people of low income, but provides for the elderly. If it weren’t for the food bank, the elderly would have nowhere to turn.

The food bank is open from 9-10 a.m. every Tuesday and provides a grocery sack of non-perishables. The food bank tries to make it appropriate for the people who need it, so women with children or young ones, they may provide frosted flakes or diapers that have been donated.

Although the amount they give per person is not huge, it allows for a meal that usually consists of vegetables and some type of grain or meat.

First Port City Bank is very grateful to the YMCA, Food Giant, Bainbridge College Wellness Center, First Presbyterian Church, First Baptist Church, Health Products and Yogurt Too, Belk, City of Bainbridge, Memorial Hospital and Care 360 for being a drop off location and donating goods to help all year round.

More than two years after Bainbridge’s Veterans Center was burnt to the ground from an arson, local men and women... read more