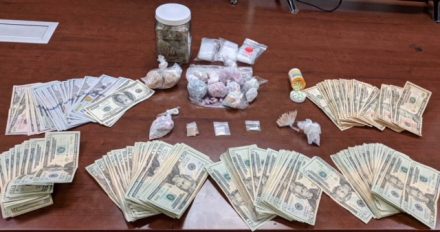 After receiving multiple tips about the sale and distribution of illegal drugs at the home, investigators forced entry into the residence through a locked front and back door. When they entered, they found John Clemons, 50, holding an infant in his arms. They read Clemons his rights and asked if he had anything illegal on him. Clemons stated he did, and Investigator Avery removed four bags of suspected molly and a plastic bag that contained 106 ecstasy pills from him, along with $321.

Investigators also searched the front bedroom of Ramu Hawkins, where they located a small pillow on the side of the bed. Inside the pillow, investigators found 700 pills of ecstasy, 50 grams of suspected molly, more than 80 pills of alprazolam and more than two ounces of high-grade marijuana. Investigators additionally found drug paraphernalia, including digital scales and empty baggies for packaging drugs inside the pillow.

While searching, Clemons made the statement everything was his. However, investigators believe Clemons was covering for Hawkins, because Clemons is the older of the two and does not have a job, Esquivel said.

Continuing the search of the bedroom, investigators found 19 bags of suspected molly, a bag of 24 ecstasy pills and a brown box containing a small amount of marijuana. Inside of Hawkins’ dresser, investigators found a yellow packaging envelope addressed to Hawkins. When they looked inside, they found six bundles of US currency wrapped with black rubber bands, totaling $6,710. In the closet, they found three alprazolam pills in the pocket of his coat.

Clemons was transported to BPS, while Investigators Nix and Avery went to FRM to make contact with Hawkins. When Hawkins saw the investigators he attempted to walk away and they found him between two semi-trailers. They searched him and found $285 and then transported him to BPS.

Investigator Esquivel said they have tried to be especially vigilant this time of year. He knows drugs are responsible for other violent crimes and people will often steal to get money to buy them.

First Seminole War to be honored in Decatur Co.

The 200th anniversary of the First Seminole War will be marked by three events in Decatur County. The first will... read more