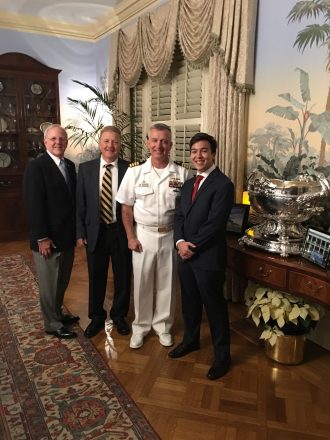 GCA students and father guests at event with Florida Gov.

It was “all hands on deck” this past Friday evening in Tallahassee as the Gold Crew of the USS Florida were guests of Florida’s Governor Rick Scott and First Lady Ann Scott. The Tallahassee reception was attended by John York, a senior at Grace Academy, his father Jim York and Emory Johnson along with two dozen additional guests for the special recognition of the crew’s naval service.

The USS Florida is a nuclear powered submarine of the Ohio-class. This submarine is the sixth U.S. Naval vessel to carry the name of the State of Florida and was commissioned for service in 1983. The 560 foot ship’s homeport is the Naval Submarine Base, Kings Bay, Georgia.

The Gold Crew under the command of Captain Greg Kercher, a graduate of Florida State University College of Engineering, were honored for their leadership and service to the country. The submarine depends on two active crews consisting of a total of 17 officers, 15 chief petty officers and 122 enlisted personnel. In addition the submarine is capable of transporting and supporting 66 Navy SEALs for immediate deployment.

Jim York was attached to submarine duty during his Navy days beginning in 1976 through his retirement following twenty years of active duty and the Navy Reserve. York discussed with Captain Kercher the changes in submarine engineering of the USS Florida from its initial construction in Groton, Connecticut as the third ship in the Trident class of submarines. The submarine with its one nuclear reactor silently travels the oceans of the world as a protector of world peace.

John York was introduced to the Navy crew and received a round of congratulations for his recent completion of interviews with the offices of Georgia’s    U.S. Senators David Perdue and Johnny Issackson as part of his application for the class of 2018 at the U.S. Naval Academy. In addition to the Naval Academy, the Grace Academy senior is considering the U.S. Coast Guard Academy and the Merchant Marine Academy. Members of the crew offered encouragement for the academic rigors of each of the academies and suggested submarine duty was a way to “see the world from the bottom up.”

Captain Kercher presented a ceremonial coin to both the Governor’s Mansion and to John York. These special coins are given only by ranking officers of the U.S. military and repeat a tradition of honor to country dating back generations. Captain extended congratulations to the Grace student for his academic and athletic achievements as well as his goal to continue his service to his country as his father before him. Jim and Theresa York own the York Associates Engineering in Bainbridge.

Johnson, as a former member of the Florida Board of Architecture and Interior Design remarked it was an honor to share this opportunity to visit ‘Florida’s House’ and its history with the crew and Jim and John. Johnson added “the comments of Captain Kercher and his crew were a testament to the dedication of each member of the Navy and the home towns stretching across America including crew members from as near as Lake City, Florida and Atlanta.