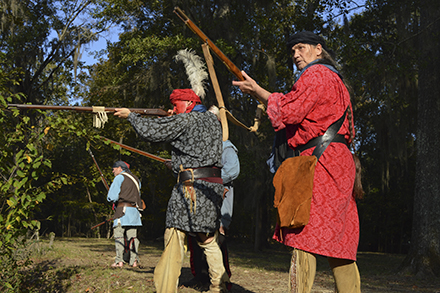 First Seminole War to be honored in Decatur Co.

The 200th anniversary of the First Seminole War will be marked by three events in Decatur County.

The first will be a memorial service at the J.D. Chason Memorial Park in Bainbridge on Thursday, Nov. 30, at 6:30 p.m. A commemorative march by the 7th U.S. Infantry Living History Association will follow on Friday, Dec. 1, at 11 a.m. beginning at the intersection of Yates Spring and 10 Mile Still Roads.

Finally, a living history encampment and memorial service will take place at Camp Recovery on Friday, Dec. 1, at 5:30 p.m. The public is invited to attend all three events.

The Seminole Wars began in what is now Decatur County on Dec. 21-23, 1817, when U.S. troops launched two attacks on the Native American village of Fowltown. Headed by the well-known chief Neamathla, the town stood near Four Mile Creek south of Bainbridge. The vicinity is marked by a historical marker on Faceville Highway (GA-97) north of Greenshade Road.

The Battle of Fowltown (actually two connected encounters) resulted in the deaths of six Native Americans and one U.S. soldier, as well as the wounding of several others.

The fighting ended when the soldiers fell back to the site of present-day Bainbridge and built Fort Hughes, a 90-foot square log stockade with two blockhouses. It stood in today’s J.D. Chason Memorial Park at the intersection of West Jackson and North Donalson Streets and is the burial site for fifer Aaron Hughes, the U.S. soldier killed at Fowltown.

The memorial service at the park will honor the dead of both sides from the battle and will feature luminaries for each casualty as well as participation by living history groups representing both U.S. soldiers of the First Seminole War era and Native Americans of the Muscogee (Creek), Miccosukee and Seminole nations.

The commemorative march will recreate the march of U.S. troops back to Fort Scott from the Battle of Fowltown. Soldiers wearing uniforms of the 1817 era will march down 10 Mile Still Road from Yates Spring Road to Lake Seminole where a reconstructed 19th century keelboat and other vessels will be waiting to take them across the lake.

The soldiers are expected to arrive at Wingate’s Landing at around 1:30 p.m. and then will march up Recovery Road and east on Booster Club Road to the nearby site of Camp Recovery. a military hospital camp occupied in 1820. A number of American soldiers died and were buried there after being evacuated from nearby Fort Scott due to a devastating fever epidemic.

The 5:30 p.m. memorial service at the site of the camp will honor those soldiers as well as others who died in combat or sickness during the First Seminole War. There will be a luminary service, a living history encampment and reenactors portraying soldiers and Native Americans of the Seminole war era.

The public is encouraged to attend all three of these once in a lifetime events!

Memorial Hospital and Manor Authority members reacted to a $1,558,565 net loss of income for the month of October. Interim... read more