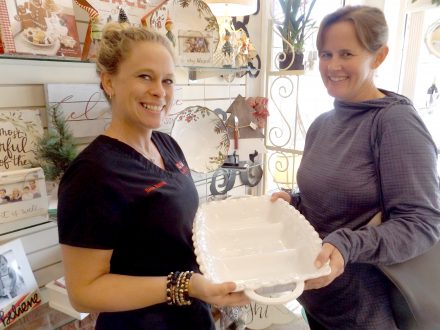 Local merchants reported a busy shopping day on Friday. Some even gave superlatives. Hannah Birdsong at Bainbridge Pharmacy described the day as “fabulous, ” where many of the items, such as Vera Bradley, Scout and Capri Blue were 30 percent off. The first 12 customers who spent $50 received a stack of Erimish bracelets. Birdsong said they gave out 12 stacks of 5 by 11:15 a.m.

Many of the shoppers were visiting family for the Thanksgiving weekend. Laurie McRae from Columbus, Ga. was shopping for a wedding gift. Another out-of-towner, Madison Perry, was happy to find a notebook and pen set for her best friend. She also received 30 percent off. The sale continues on Saturday – Shop Small day.

A peek at Reeves downtown found another out-of-towner, Terri Morris, from Jacksonville, Fla. She likes to come here for Thanksgiving with family, then go shopping the next day. It is their tradition. They started the day with lunch at The American, and in Reeves they were shopping around. Reeve’s reported their day sales had been good, with 20 percent off all Christmas ornaments and some of the retired Brighten purses were reduced by 40 percent.

Bettys’ Xchange, where customers were found looking through the hanging garments, was having a drawing for as a $25 gift certificate and another for some of Betty’s Signature Candle, for any who spent $25 in the store. They reported consistent and steady good sales all day.

Flint River Outfitters was very busy. The “women’s” side found Tammi Lyle and her mother-in-law, Sandra Lyle of Dalton, looking for such items as ornaments, candles jewelry and gift cards. Store clerk Lynn Sharber said the sales had been “awesome and incredible” ever since they opened at 9 a.m. They were having several items at 25% off, including Costa sunglasses and bath articles, as well as select hobos purses, to name a few items.

The shoe department was also very busy, while the “men’s” division saw customers looking to purchase guns and other hunting and fishing gear.

Many of the sales will continue on Saturday -Shop Small Day, and locals, along with their visitors are encouraged to patronize their hometown merchants.

County leaders graduate from the Georgia Academy for Economic Development

The Board of the Georgia Academy for Economic Development announces Decatur County graduates from the 2017 Region10 Multi-Day Training Program. ... read more