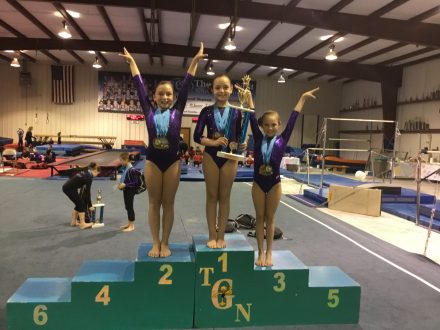 The Gymnast-a-Cats had a successful weekend in both Macon and Moultrie and are now making room for their newest trophies.

They first competed at the Wheel of Champion Meet in Macon, where they competed against 14 other teams. Marbella Rich was the competitor for the Xcel Platinum Division. She dominated, winning all five events and first all around. The level 12 team took home first place team, due to the teammates individual successes.

Level four’s team had Lauren Godwin compete and place sixth all around, and the level five team won 12 medals due to Bailey Nunnery, Bansi Patel and Asha Vicker’s hard work.

Level three’s team won 20 medals, with Anniston Brown winning first on floor and first all around. Dhara Patel won second all around and second on floor and balance beam.

The Xcel Platinum Team was also successful in this meet, with Marbella Rich winning second place on vault, bars, beam and floor exercise. She took home second all around.

Her teammate, Gabby Hardee took top honors after winning first place on vault, bars, beam and floor, giving her first all around.

The coaches at Murkerson were so proud of all the team and girl’s hard work and cannot wait to compete again soon.

The coaching carousel is starting early

Rumors are exactly that—just rumors. But it’s always fun to explore a bunch of “what if” scenarios in the world... read more