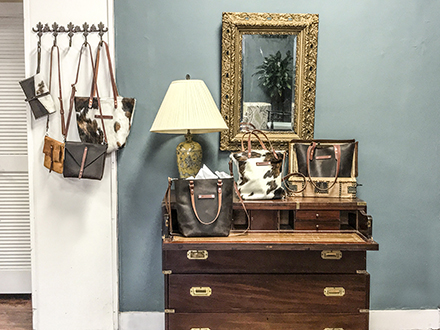 Residents may have noticed the most recent addition to shops on the square: Edgemon-Crockett Alligator Belts and Accessories.

George Edgemon started creating alligator belts almost seven years ago, after watching his dad wear them. Edgemon always made knick knacks growing up, so when his dad started producing his own belts Edgemon jumped in. During their first year of creating belts, Edgemon said they were trained by the top beltmaker in the country.

Once they created the first one, they just continued to build inventory and let the business naturally progress. The father-son duo started selling to men who would take the belts to shows, where the Edgemon’s belt would place in the top two. That’s when they realized they had a future in the business and their name started to take off.

They start off the process by getting wild American alligator skin from the American Tannery, one of the biggest tanneries in the world. The Edgemons take great pride in the type of skin they buy and where it comes from. American Tannery sells to companies such as, Valentino and Brooks Brothers, so to have that same quality is something they strive to market.

While other stores may create a two piece, Edgemon-Crockett specializes in creating one solid piece cut, meaning the belt would have no repeat patterns and last longer and making it higher class. They said they do everything they can to make sure it is top of the line.

When customers come in, George’s father, Tom Edgemon gives every customer personal attention and explains all the different types of cuts they can choose from.

Edgemon also takes pride in the fact that they can deliver to customers quickly. They rarely need advance notice; if a customer orders that morning, they are usually able to get it by that afternoon. However, with the holidays coming up Edgemon said they may get stuck with up to ten orders a day, so they mayneed  one day advance notice.

While alligator belts are their specialty, Edgemon recently added bags and purses to their collection. He made his first bag for his girlfriend, using the minimalism style and now the collection has “blown up.” He lets customer pick the colors and design they want, allowing them to have a one-of-a-kind piece.

Although all the products they have are high priced and high quality, Edgemon and his father strive to make sure they are more affordable than their competitors.

This holiday season they will be coming in early and staying late to answer all questions and help people design something special for someone in their life. Edgemon said they will be arriving around 8 a.m. and staying until 6 or 7 p.m. to make sure everyone who wants to is able to stop by.

More than 300 University of Georgia students have been inspired and trained to launch their own startup businesses, benefiting from... read more