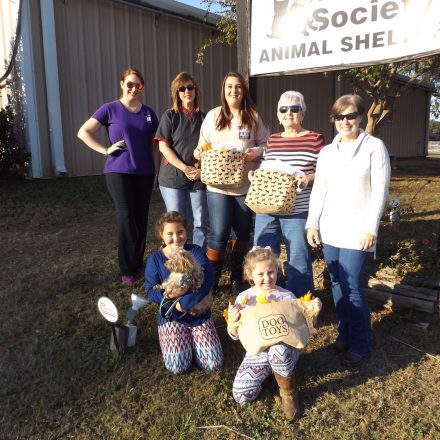 Four top winners of this year’s Humane Society Calendar contest were recognized at the Shelter Thursday afternoon when they came to claim their gift baskets presented by Tamara Buckhaulter, contest organizer.

The baskets contained animal specific treats, toys, T-shirts, gift certificates and the new 2018 Calendar. The top winners were those pet sites that raised $250 or above in the contest. Twelve overall winners each won a place in the calendar, featuring one per month.

Patsy Henry, well-known for her bunnies, won with her photo of 5-1/2 year old Molly, who graces the month of April. Mr. October was the month given two-year old Charlie Brown, owned by Sandy Rentz. He came along to claim his gift in person. The month of January boasts Mallori Maxwell’s cat BB, a three-year-old who was adopted from the Shelter. Not present was Lauren Turner, whose poodle, Jingle Bells, legitimately claimed the month of December.

The calendars are available for sale at $20 each. There will be a supply of them at the Bizarre Bazaar this Saturday and Sunday at the Firehouse, at the booth occupied by Patsy Henry and her rabbit. They can also be obtained from Animal House or the Shelter on Cox Avenue.

During City Council’s most recent meetings, Jessica and Alijah Rand have approached Mayor Edward Reynolds about getting a speed bump... read more