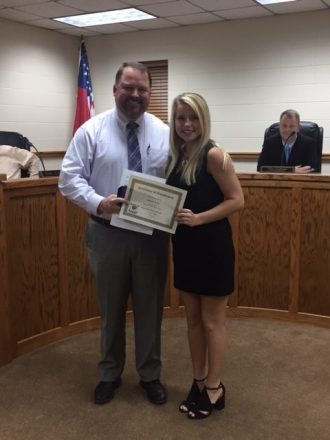 Board of Education honors awarded students

Thursday night three Bainbridge High School students were awarded at the Board of Education meeting for DAR good citizenship and the Wendy’s High School Heisman.

Senior, Camry Fillingame received the DAR Good Citizen Award. She was required to have teacher recommendations and write a timed essay in front of the school principal. In addition, Fillingame had to send in her transcript, SAT test scores and community service hours.

“It’s been a lot, but I was able to push through it,” Fillingame said.

Fillingame was not originally aware her name was even in the running for the award until she saw the list. Once she saw her name, though she was elated.

“It’s a huge deal,” Fillingame said. “I put in so much effort and work into everything I do; I feel like I deserve it. I’ve been praying for something like this.”

The award will allow Fillingame to gain a scholarship and attend the school of her choice. She’s unsure if she wants to attend Abraham Baldwin Agricultural College or Andrew College yet, but she is excited this opens up the opportunity.

Her mom said she is extremely proud of her, along with Principal Roy Matthews. The faculty nominates the students for the award, and Matthews said when it came to nominating Fillingame she, or any other student selected by the faculty would be a great choice.

“They are great examples and role models for our younger kids in the elementary schools,” Matthews said. “They are very actively involved in extracurricular activities. It is evident their parents have done a good job raising them, and we’ve done a good job educating them.”

Toole is a senior, who has lettered in four sports and dedicates her time to extracurricular activities and community service.

Toole was hoping for the award, because of her dedication and involvement in sports. Although she participates in various endeavors, her favorite is swimming. She said she is probably the least good at swimming, but it’s something she finds fun and enjoys doing.

Toole’s mom, Hope recognizes her daughter’s drive and sees that she puts her heart and soul into everything that she does.

“She has excelled in academics, sports and community service, which makes her the perfect example of what the Wendy’s High School Heisman represents,” Hope said.

Toole was most proud that the award showed she’s not just a good person on the court or in the pool, but shows who she is outside of sports.

Toole hopes to put award scholarship to good use at Mercer University in the fall, when she majors in pre-med.

Savage was unable to attend the Thursday night ceremony, but Matthews discussed what a great kid he was. Savage is very involved at the YMCA, where he works. He also helps with the swim team and is extremely community oriented.

The Board all expressed how proud they were of the students and their academic and athletic accomplishments. They hope to continue raising students who give their all inside and outside the classroom.