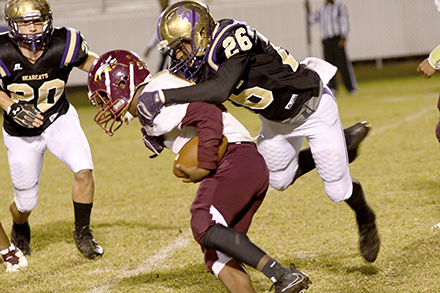 Bainbridge is heading to Round 2 of the State Playoffs after a huge first round win at Centennial Field.

The same can be said last season when the Bearcats beat Whitewater 50-12 and headed off to play Rome the next week, where they fell 45-0. Bainbridge doesn’t want to think about that loss.

But what makes this season different?

“That goes back to not missing a day getting better at practice,” said coach Jeff Littleton. “I felt like we didn’t do that as well last year. We as a coaching staff have tried to fix some things and we feel like we have done a better job this year.”

Bainbridge (8-3) defeated New Hampstead last Friday 48-6 and looked sound in all phases of the game while doing it. Littleton has always focused on avoiding hangovers after a big win, and this week is no exception.

“We rely on our mastery of the fundamentals,” Littleton said. “When you get in this time of the year, you’re going back to those fundamentals that you worked on all summer and winter. This is where it pays off, because you’re going to play really good football teams who are as talented or more talented than you are.”

Bainbridge will see talent this week in Fayetteville. The Bearcats are travelling there to play Starr’s Mill (10-1).

“They are really a fundamentally sound football team,” Littleton added. “Offensively they are very disciplined, and they take advantage of what you give them. They do a really good job of not missing assignments.”

The Panthers run a Wing-T offense with some veer concepts sprinkled in. Their top four rushers, seniors Mitchell Prowant, Nick Brown and Cole Gilley and sophomore Kalen Sims, each have more than 600 yards and have combined for 41 touchdowns this season.

Quarterback Joey Deluca is also quick on his feet, rushing for 372 yards and six touchdowns on 58 carries. In the air, he’s 28-of-69 for 600 yards and a touchdown.

“He really doesn’t have to throw the ball much, but when he does he makes really big plays,” Littleton said.

Wide receiver Branden Rew is his top target, accounting for 11 receptions for 303 yards and a touchdown.

“They blitz off the edge and inside,” Littleton said. “They got some solid secondary players. Solid football team.”

Bainbridge kicks off against Starr’s Mill at 7:30 p.m.

For the third year in a row, Bainbridge has advanced to the second round of the playoffs under head coach... read more