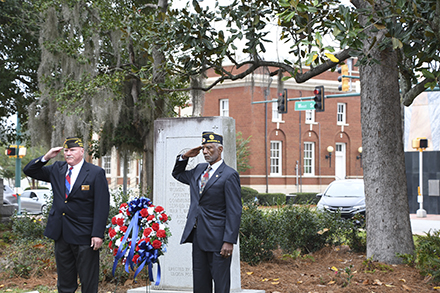 The words of this poem rang in the ears of many this morning as people gathered in Willis Park to celebrate Veteran’s Day and honor those who served.

Ron Gilliard, LTCOL, USAF, RET gave a speech Friday morning in Willis Park at the ceremony that featured some of Billy Ray Cyrus’s song, “Some Gave All,” that was written for Vietnam veterans. He focused on the particular lyrics, “All Gave Some, Some Gave All” He looked around and told the men and women standing there in uniform that all of them gave some; they gave a tremendous amount, but some were missing because they gave all.

Gillard spoke of a high school classmate, John Wilson Rivers. He described him as 6’9 and nothing but arms and legs. Rivers was the water boy for the football team and would always make sure the team had their “dip of water.” Rivers went on to make sure soldiers were comforted in Vietnam, where he ultimately passed away. Gillard always makes certain to rub his finger over Rivers’ name when he visits the Vietnam Wall and say a silent prayer. Gillard said Rivers was an example of a man that gave all.

Gillard also spoke of another man that gave all: the man who lies in the Tomb of the Unknown Soldier. The Tomb is protected by soldiers no matter the weather, Gillard said. Even during a hurricane, soldiers will stand to protect the man who made the ultimate sacrifice for this country. Gillard encouraged everyone to go visit the Tomb, which is located in Arlington Cemetery in Washington D.C.

Gillard finished his speech with an email he received from his friend that described the way all give some and some give all. He described soldiers as making a check out to the government. Uncle Sam in some cases only cashes some of the check, allowing people to return home. But in other cases, Uncle Sam cashes in the entire check they wrote and nothing comes back.

The program ended with the list of 2016-2017 deceased veterans being read off and a flower display being put at the memorial in Willis Park.

The program was followed by an appreciation luncheon at the Kirbo Center, where veterans were asked to share stories of times they remembered. Many welled up in tears, saying they would rather not look back on that time. Two men worked on C130’s in Vietnam. They talked about how they transported everything from weapons; cargo to pigs, but the most difficult thing they ever had to see was when body bags and stretchers were brought onto the C130’s.

WWII veteran, Bennie Brookins described the experience as leaving home a boy and coming back a man. Everyone agreed, saying amen.

The program concluded with people standing up for their fight song and finally singing “God Bless America.”

Bainbridge has always held its veterans in a high regard. Starting this year, the city will be doing so literally.... read more