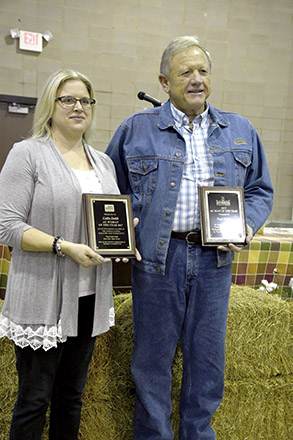 Decatur County’s Ag Man and Woman of the Year were recognized at an appreciation luncheon for the local agriculture industry Friday.

Paul Digby, executive director of USDA in Decatur County, and Cathy Smith, also an employee at USDA, received applause from friends, family and colleagues after a meal at the Cloud Livestock Facility. Both were honored with plaques to commemorate their joining of a long list of past Ag Man and Woman winners.

Both said they were humbled to be given the 2017 awards.

David Bridges, president of Abraham Baldwin Agricultural College, was the keynote speaker for the luncheon.

He addressed the role of agriculture in Georgia and the important job the farmers in Decatur County had for the livelihood and economy of our state.

He spoke of the importance of the next generations’ role in agriculture.

Bridges is helping lead the merger of ABAC and Bainbridge State College with Southern Technical Regional College, and has been involved in the process since it was announced last year.

Bridges believes a solid education is a difference maker in communities like Bainbridge.

“Education is the key to moving our community and our state forward,” Bridges said.

Bridges said he believed in excellence in all aspects of education and engagement between students and a potential workplace, such as an internship. He will bring those same philosophies to Bainbridge’s campus, and educate students as efficiently as possible.

“We want students to graduate on time and with as little debt as possible,” Bridges said.

The luncheon closed with a prize drawing for items donated to the Chamber of Commerce from local businesses.