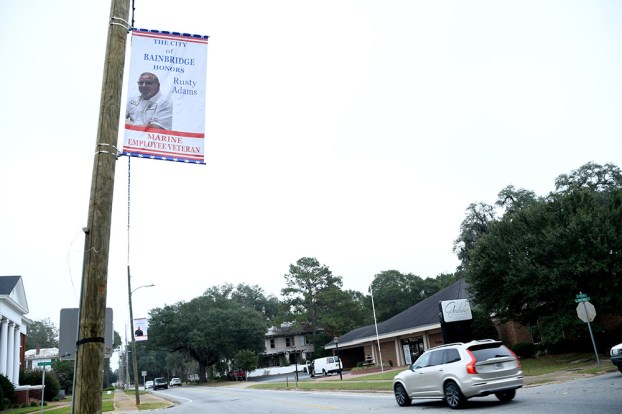 A banner honoring Rusty Adams, a city employee who served in the Marines, hangs above Shotwell Street.

Bainbridge has always held its veterans in a high regard. Starting this year, the city will be doing so literally.

Hanging along the poles above Shotwell Street are banners honoring each of the City of Bainbridge employees who have served in the military. The banners were raised earlier this week and will hang throughout the next week.

“It makes a really cool statement,” said Hobby. “When you think about it, these folks served their country, then they came home and went to work in community service. Literally, they have devoted their entire live to the service of others.”

The banners are a striking reminder of how diverse Bainbridge’s veteran population is. Men and women of different races, creeds and backgrounds are on display.

“It’s just a way to say thank you to those folks for their service right here at Veterans Day,” said Hobby. “Hopefully, it is something we will continue every year as we hire additional veterans.”

Among the banners is Tammy White, benefits and payroll coordinator for the city. She served in the U.S. Navy from 1977 to 1982, spending the majority of her time stationed in Hawaii. She came back to Pensacola, Florida, and worked at a naval air station for a couple years before finishing her military career in Gulfport, Mississippi, at a construction battalion.

“I’m honored that (Hobby) chose to do that for us,” said White.

Bainbridge Utilities Director Rusty Adams is honored to be hanging above Shotwell Street along with White and the others.

Adams’ father was a marine, he was a marine and his son is a marine. Honoring veterans is something he takes seriously in his family.

“It was a big surprise to me,” Adams said. “It makes me proud to see my picture up there with all the other veterans. It’s nice to know they honor us here.”

Adams served in the Marines from 1981 to 1984 and has been stationed in Japan, South Korea, South Carolina and North Carolina.

The City of Bainbridge took photos of the employees without telling them what they were for, leaving it up for surprise when they saw their faces along Shotwell Street.

Veterans Day is celebrated on Saturday, Nov. 11, in the U.S. Bainbridge will have a public ceremony Friday morning at 9 a.m. at Willis Park to honor those who have served in Decatur County.