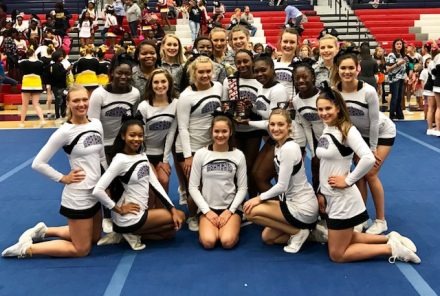 Despite the adversity faced by multiple injuries and setbacks, the Bainbridge High School competition cheerleading team had a successful season and is headed to state competition Friday night.

The team finished with a third place region win over the weekend in Moultrie, but previous to that had placed second, and first in all their competitions. Their first and second place wins are a true testament to their determination. During the week of exhibition, the team had to re choreograph their entire routine because of injuries.

“This would have broken any other team,” Coach Lea Hawkins said. “But, we love adversity.”

This was not the last time the team would have to change up their routine; in fact they would change it weekly, depending on what team members were able to participate.

The routine they performed in Moultrie proved all the hard work they had put in was worth it when they pulled off 100% of their routine, hitting all their stunts and jumps. They were the only team in the region who received a 100% at the competition.

Coach Hawkins said although they came in third place. It was very close; there was only an 8-point difference between 1st and 3rd.

“We didn’t come home region champs, but we felt like it,” she said.

Because of their 3rd place win in region, the competition team will be heading to Columbus on Friday to compete at the state level. While competing at the state level the girls are remembering one word they came up with to describe the year: depth.

While going through all the ups and downs and injuries, the team developed an acrostic that stands for determination, energy, positivity, teamwork and heart. They hope to put all those attributes into play on Friday at the meet.

Before the meet on Friday, all the cheerleaders, football players and band will gather at the high school for the annual bonfire. The bonfire will begin at 6 p.m., where the senior football players will throw the wooden rendition of the phoenix the art department built into the fire.

Myth states that phoenixes can rise from the ashes, so the team may even consider putting the ashes into the river. Everyone is invited to come and help prepare the team for playoffs and cheerleaders for state.

Who’s in? My top four picks for the first round of College Football Playoff rankings

By the time these words are published Wednesday morning, the official College Football Playoff committee will have its first round... read more