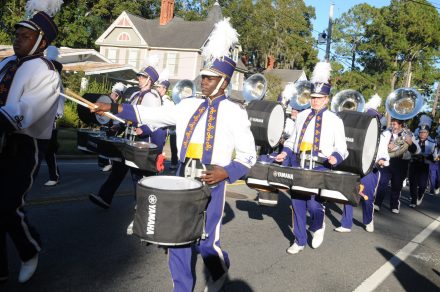 Bearcat Band marches to the beat all the way to Chicago

The Bainbridge High School Band will be appearing in the Magnificent Mile Lights Festival Parade on Saturday, Nov. 18.

The band is one of six bands that were invited to participate in this 50-year-old parade. The Parade is held annually in Chicago the Saturday before Thanksgiving. It originated in 1949 and is the official kick-off of the holiday season in Chicago and around the nation.

An estimated one million lights on 200 trees brighten the city’s  Michigan Avenue, also known as the Magnificent Mile. It is considered one of the largest Christmas holiday celebrations in the country.

Aside from the numerous lights and decorations that line up the Magnificent Mile, the lights Festival also features a colorful parade. The parade showcases 40 floats with huge helium-filled balloons and is led by well-known Christmas characters such as Rudolph the Red-Nosed Reindeer and Frosty the Snowman.

Mickey Mouse and Minnie Mouse from Disney and Kermit the Frog and Miss Piggy of the Muppets have also been regular fixtures. Lively music for the festivities is provided by marching bands from different parts of the United States, one of which is the Bainbridge High School Band.

The band students have held various fundraisers to earn their way to this prestigious parade. The Bainbridge Band has brought much pride and recognition to Decatur County and the State of Georgia.

The lessons learned on trips such as this goes far beyond the classroom. Students will gain first-hand experience of historical sites and organizational skills, along with the fact of experiencing how people live in different areas of our country. Of course, performing for thousands of people is an experience all by itself.

Many of these skills and experiences can be read about in a book, but never portray the actual hands-on that these students have already experienced to some degree, in preparing for the performance and paying their own way. Memories and skills will be developed, which will enable our future leaders to mature into adult hood with a much better understanding of the responsibilities which lie ahead for them.

During the month of October, the Southwest Traffic Enforcement Network gathered together in Bainbridge for a training seminar on evidence... read more