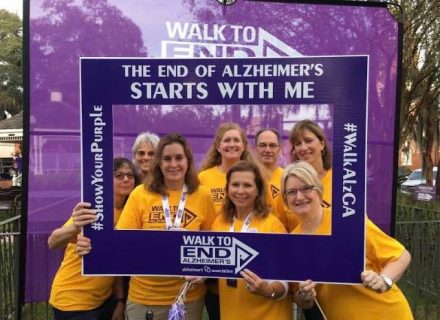 More than 300 residents from Bainbridge and surrounding areas joined the Alzheimer’s Association Walk to End Alzheimer’s in the fight to end Alzheimer’s disease at the Square in downtown Bainbridge. Participants raised more than $73,000 to fund Alzheimer’s care, support and research programs.

Team Side by Side was the top fundraising team at this year’s Walk to End Alzheimer’s, raising more than $6,000.

“Team Side by Side was thrilled to be a part of Bainbridge’s first walk which was a tremendous success”, added Ann Brannen, Team Captain, Team Side by Side.  John Simmons, my father, passed away last year from Alzheimer’s disease. Our team participated to honor Daddy and to honor other team member’s family member who have suffered as well. Through the Alzheimer’s Association and by walking side by side, we bring support, funding and care to those around us”, added Brannen.

In Georgia alone, there are more than 140,000 people living with the disease and 519,000 caregivers.  In the United States, more than 5 million Americans are living with Alzheimer’s disease, the sixth-leading cause of death in and the only disease among the top 10 causes that cannot be cured, prevented or even slowed. Additionally, more than 15 million family and friends provide care to people with Alzheimer’s and other dementias.