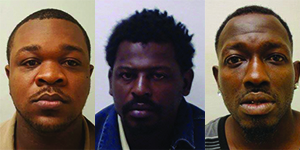 Louis Lamorris Ousley, 29, Thaddas Nundra, 38, and Ronnie Denardo McFadden are each being charged with felony murder and criminal attempt of armed robbery. Nundra is also being charged with malice murder, as he is believed to be the man who shot and killed Moore.

Each of the three suspects has extensive criminal backgrounds, according to BPS. Nundra is currently out on bond for an aggravated assault case in Buena Vista, Georgia.

During the homicide investigation Thursday, BPS was led to the three individuals after local businesses cameras and other informants identified them as possibly involved with the incident.

“With surveillance cameras, we were able to capture images and videos of the direction of travel of some suspects,” BPS investigator Mark Esquivel said.

Investigators are still trying to discern the motive of the attack. Moore, a Post-Searchlight employee, was getting into a truck to begin his delivery route when he was shot and killed around 6:30 a.m.

“During some of the interviews, we learned they were maybe going to go downtown, maybe rob a business,” Esquivel said. “They saw Mr. Moore walking out and one of them decided, hey, let’s rob Mr. Moore.”

According to Esquivel, on Thursday afternoon, CID Investigators recovered a jacket located close to the crime scene behind River Plaza Shopping Center.  Research revealed that the jacket belonged to Nundra.

Investigators continued to search the area and were able to locate what is believed to be the firearm used in the crime on Friday morning.  The pistol was wrapped up in a knit hat, and partially covered with dirt.

Scenes from the 2017 Homecoming Parade