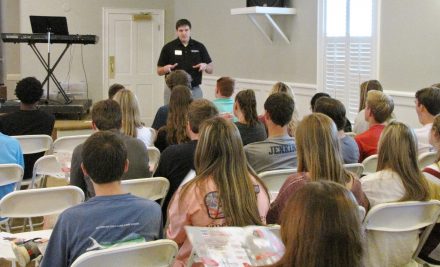 Grace Christian Academy High School students enjoyed a very informative session with Jay Menees, a University of Georgia recruiter. Mr. Menees commended them for their hard work in high school and shared pertinent dates and requirements for admission into UGA.

GCA has a great tradition of admissions into Georgia. Thirty students have been admitted through Early Action (EA) over the past four years. In fact, GCA has a 100% Early Action (EA) success rate for this time period. Mr. Menees not only lauded their diligence to maintain outstanding GPA’s, but expressed approval of their curriculum rigor choices, as well as their efforts toward solid ACT and SAT scores.

The University of Georgia has over 27,000 undergraduate students with an 18:1 student/faculty ratio. With over 200 majors and academic programs, UGA has something to offer everyone.

According to U.S. News and World Report, UGA ranks #18 among the Top Public Schools, while Forbes ranks the university as #17.

Kiplinger ranks UGA as #10 for the Best Value in Public Colleges. UGA, also, offers over 100 Double Dawg Accelerated Degree Programs where a student can earn an undergraduate and graduate degree in 5 years.

Seniors were honored on the field before last Friday’s game against Thomas County Central. Click through the gallery below to... read more