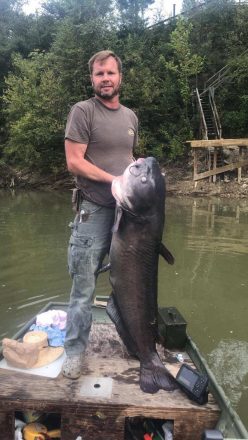 A day of fishing is good. A day you catch a new state record – and beat the old one by more than 12 pounds – is great! Richard Barrett is the new state record holder for the blue catfish. His catch, weighing 93 lb, 0 oz, beat the previous 2010 record of 80 lb, 4 oz., according to the Georgia Department of Natural Resources’ Wildlife Resources Division (WRD).

Barrett, of Axson, hooked this new state record blue catfish on the Altamaha River on October 14, 2017 using a live channel catfish they caught earlier in the day as bait.  The fish was caught on the edge of a deep hole, and the angler told WRD staff that he was shocked when he got it to surface and thought there was no way he was going to get the fish in boat! WRD fisheries biologist Tim Bonvechio aged the fish at 14 years old, which indicates a good growth rate.

“It is always good news when I hear about someone catching a new state record fish in Georgia as it continues to show me how many great fishing opportunities are out there,” says John Biagi, Chief of Fisheries for the Wildlife Resources Division.  ”This is our first state record of 2017, and I hope it ignites a fire in all new and experienced anglers to get outdoors and go fish Georgia!”

Anglers looking to fish on the Altamaha River can find helpful information on the WRD website at http://georgiawildlife.com/fishing-prospects.

Anglers must possess a current Georgia fishing license to fish in public waters.  Where can you get a license? Buy it online, find a list of retail license vendors at http://georgiawildlife.com/licenses-permits-passes or buy it by phone at 1-800-366-2661.

By purchasing a license as well as fishing equipment and related items, you and your fellow anglers help fund sport fish restoration programs, thanks to the Sport Fish Restoration Act.  This Act allows funds accumulated from a federal excise tax on fishing equipment and related items to be directed to activities that benefit recreational anglers.  A portion of these funds is provided to the Georgia Department of Natural Resources based on several factors, including the number of paid sporting licenses.  Sport Fish funds make the following activities possible: managing sport fish populations, raising freshwater fish in hatcheries and stocking them in public waters, maintaining and operating public fishing areas and building boat ramps, and much more!

Information about state-record fish, including an application and rules, can be found at http://georgiawildlife.com/fishing/recordprogram/rules or in the current Sport Fishing Regulations Guidebook.

For many hunters, the opening day of firearms deer season feels a little like Christmas morning does to a child.... read more