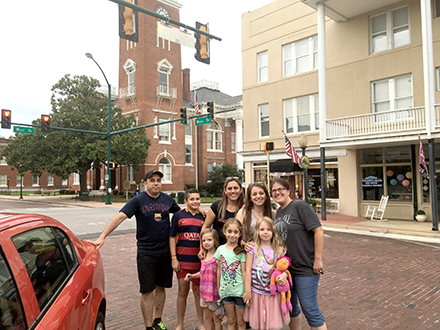 Hendersons preparing to move to Middle East for mission work

Tommy and Rebekah Henderson left Bainbridge two years ago and moved to Clarkston, Ga. to prepare for missionary work. Now, Tommy is back in town for the weekend to update his friends on how their plans are shaping up, as well as give a  review of what their lives have been as they have lived among the refugees from Syria, Iraq and Ethiopia.

They are now looking forward to October, 2018, when they plan to move their family of three young daughters to Lebanon. It is described as probably one of the easiest and safest places to be in the Middle East. But, just to be sure, Tommy and Rebekah plan to go next summer for three weeks training and check out the living arrangements before they take the girls. Tommy has already been for one visit and is very excited about the area, which has a rich and varied history and is a rich agricultural area.

They are making preparations now, learning some Arabic, or at least Rebekah and the children are. Tommy has been teaching at the Mission Training School at the Clarkston site, preparing individuals for life overseas. It is church and mission related, trying to mix spiritual life while meeting physical needs of those they serve.

“I have really enjoyed getting to partake of life with them,” he says of the refugees that have come from around the world.

His impression is that the Syrians love it here and want to stay. They are working toward citizenship. He describes them as peaceful people who fled their war torn country. They have told him that extreme Islam is the reason they had to leave their homes. They just wanted to live in peace.

The Hendersons have formed some very solid friendships, where they share holidays and feasts together. This summer they even went on vacation with one Syrian family, taking them to the beach. “We had so much fun,” he declares.

“It has been a great experience, with a lot of learning on both sides. They are trying to become more American and we are trying to understand what is important to them.”

He said when the government cut off their food stamps when the current administration took office, it was amazing how American people stepped up both independently and united, with food, money, clothing, and volunteering to take care of their needs. “That, to me, is the story of America,” he declares.

Tommy will be at his former place of business, The Bean, this Saturday morning  (Oct. 21) from 9 a.m. to 11 a.m. to visit with friends old and new, while sharing his story.

Walking for a cure

Almost one year ago, three women had a conversation at a Decatur County Schools reception and came up with an... read more