Stories from the storm: What you experienced 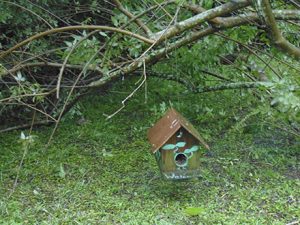 We asked readers to submit stories of their own from the Hurricane Irma weekend. Below are a few of the amazing tales.

I want to tell you our storm story for how proud I am of my husband Tom White.  First of all my mother and father (they live in Newnan) did not want us to stay at our home since we have so many trees by the house.  I thought my daughter and her boyfriend and his family from Tampa were coming up so I cooked several racks of ribs, a huge pot of chicken and rice, a baked chicken, Barbeque Boston Butt and stocked up on supplies and got beds ready.  Well the Tampa family decided to “ride it out”.  My other daughter and her boyfriend decided to stay in town.  My husband said he felt he did not need to go to Newnan because he had a lot of tools and he was able to do emergency repairs neighbors might need (he helps neighbors with building projects and a wide range of repairs all the time).  With my mother still calling me, and the fact that I was still recovering from foot surgery and would be no good in an emergency situation in our neighborhood I decided to head north to my parent’s house on Saturday.  Friday evening my husband recalled me telling him that on Facebook someone mentioned Florida refugees sleeping in cars in the Walmart parking lot with children.  He mentioned that maybe since no one was coming home we should find a family that could stay in our studio apartment.  I was hoping he would say that, especially since we had so much food and so much room.  Also our grandlove’s playroom that the kids could enjoy to get their mind off of things.  We went to the parking lot trying to make an educated guess at the family that needed us.  We saw an elderly couple who were terrified when we approached them and insisted they were o.k. and rolled their window up. I did not think we were scary people.  After all, we are grandparents.   We saw two women and a child in a car in the back parking lot and they said we are fine and rolled the window up quickly.  The next was a van with an older man at the wheel a twenty something woman and a two year old.  The woman was relieved and another man that appeared thanked us and God over and over.  Then they proceeded to tell ( ut oh) the REST of their group in several other vehicles.  What we thought was a family of three turned out to be 9 people!  Three insisted on staying in the parking lot so we housed 6 the first night before I left.  The next night after I was gone the other three showed up so my husband was caring for 8 because the older father insisted on staying in the van in our driveway.  They pretty much stayed up until 2 in the morning in the main house and slept late, past the time the kids were up.  My husband did this by himself.  I am usually the ‘caretaker’ for meals, entertaining and guests.  This was huge for him.  I am so proud he took this on.  Of course, there were many learning experiences with this.  We may do things a little different next time and we do have some ‘hindsight’ advice for others who would like to do this.

We lost a beautiful tree that grew right beside our house.  It was pulled up from the roots and landed right by a window, but fortunately did not damage our house.  When I saw it, I remembered that our son’s birdhouse that he built in middle school was hanging from that tree.  It was a heavy wooden house that was difficult to hang so I did not take it down.  I never thought about that tree falling because it was a healthy tree.  I was afraid the birdhouse would be crushed beyond repair. But when we finally went out to see, there was the birdhouse hanging about a foot from the ground- still intact and untouched- with the broken tree all around it.

While we are all reflecting on the last few days, I feel like I need to share my Hurricane Irma story. Ryan and I were in Senoia for the weekend while Emma Ryan was at Camp Southern Ground. Saturday night I had no service, and my phone had died.

As soon as I charged it, I received a text from my Dothan friend, Lori Woodham Dawkins. She was being the compassionate friend that she is trying to get two ladies, their children, and horses from Florida to Dothan through Bainbridge. Just outside of Bainbridge they had a flat tire. She text me asking for help. I felt helpless being four hours away! I then text LeAnn Buchanan to see if Jackson Buchanan was where he could go help these ladies that were exhausted, stranded, and scared. Without hesitation, Jackson went to their rescue immediately! LeAnn and I text a few more times, and she assured me they would take care of these ladies and their families! And they did just that! They were back on the road as quickly as humanly possible! Yes, it would’ve been easier for them to go I-10 to Dothan. Lori knew they were nervous about the trip already, and something told her to send them through Bainbridge! Tonight I am thankful she listened to that “nudge” and even though I wasn’t here to help, I have friends like The Buchanan’s always willing to lend a kind, caring, and loving hand! ❤️❤️