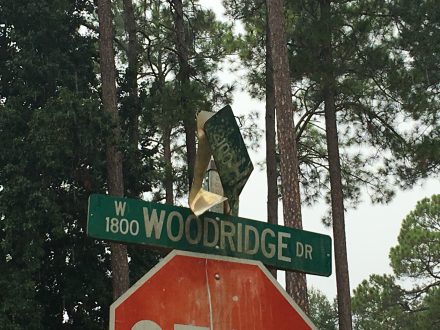 Residents living on Woodridge Drive and Twin Lakes in Bainbridge are complaining about damages that occurred at 1:48 a.m. Sunday, Aug. 27, when several youths operated an All-Terrain Vehicle (ATV) through the neighborhood.

Bainbridge Public Safety was called to investigate broken street and stop signs, mailboxes, knocked over trash cans and beer cans littered in one of the yards.

“There have been a lot of complaints in Twin Lakes the last couple months,” said Bainbridge Public Safety officer Leroy Akins.’

Akins found the damages in the area Sunday morning after the incident occurred. He said he also found tracks in the yard. One of the property owners, Denny Nichols, said their video camera picked up photos of the people involved, and she turned the footage over to BPS.

“This has been a big problem in our neighborhood for a long time,” Nichols said.

She and other neighbors have expressed their concern for the safety of young people being out alone at that hour, as well as the underage drivers operating these types of vehicles on the roads.

According to Section 78-45 of the City of Bainbridge ordinance, motorized carts that are operated within the corporate limits of the city are subject to certain rules.

A person driving alone must be 16 or older and have a valid motor vehicle driver’s license. A person who is 15 can drive a cart if they are accompanied by someone who is 18 with a valid driver’s license. No person under 15 is permitted to operate a motorized cart on any public street within city limits.

Motorized carts cannot be driven on sidewalks, and they must abide by all traffic regulations applicable to vehicular traffic. They also must comply with the equipment regulations handed down by the Georgia Commissioner of Public Safety, meaning it must have working taillights and blinkers.

Section 78-46 of the ordinance states each person operating a motorized cart is liable for his or her own actions, and penalties are punishable under section 1-7 of the city ordinance.

“(Motorized carts) can be real dangerous on a roadway,” Akins said. “There are a lot of sharp curves around twin lakes. I believe the parents should supervise their kids. I would advise them to do that.”