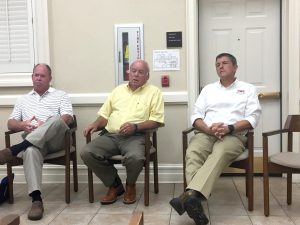 The Civics 101 group hosted a public forum at the Gilbert H. Gragg Library to discuss TSPLOST with the city officials and county commissioners Monday.

Billy Ward, cofounder of Civics 101, opened up the meeting by allowing the city officials and county commissioners talk about how this will benefit Decatur County and explain any misconceptions.

District six Commissioner Pete Stephens explained that, “We (Decatur County) are in a position where we can improve the infrastructure, not only locally but around the state as well.”

He explained what a positive change this could bring about and that if they had done TSPLOST through the region, the money wouldn’t have stayed in the county, but this way it will go directly towards Decatur County. He said when other counties see this new opportunity Decatur County has created, they will follow suit.

Mayor Edward Reynolds agreed, explaining how four years ago the state put out a TSPLOST regional initiative, but it did not pass in our region, so the county was unable to participate. But, after the waiting period, the county has reintroduced the initiative.

Many of the projects will be approved by the state so the money can be matched when fixing the potholes and damaged infrastructures. The county anticipates TSPLOST to raise about $4 million annually. Reynolds stressed the city has no way to ask for money directly, so this TSPLOST would help them fix things they are usually unable to.

Not everyone was convinced, however.

County resident Ray Brock voiced his opinion against TSPLOST. One of his concerns was that the city and county would not have a good working relationship and make duplicate purchases or put one project above the other. However, Commissioner George Anderson assured Brock that they have been working together to decide what needs to be first on the priority list.

They want to talk to bus drivers, emergency services and ambulances about what needs to be done- people whose livelihood depends on driving these streets. Brock was unconvinced and felt like if they didn’t do TSPLOST there would be a property tax increase. He claimed it was a “lose, lose, lose” and he wanted another option. In addition to his earlier concern, he felt that the people who merely travel through and complain of the roads, don’t have to live here every day and their taxes do not go up. He wanted to make sure we don’t focus on visitor’s concerns, more than the concerns of the people who live here.

Anderson emphasized that TSPLOST is a way to relieve the property taxes and help with community development. He encouraged people, regardless of their opinion to go out and vote for it and have their voices heard.