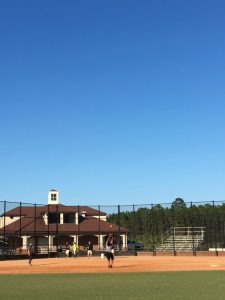 Lady Cats put in the work at practice to get better every day. Coach Christopher Bryant is impressed with how the team is bonding, a crucial part to any team’s success.

The Bainbridge Lady Cats played five games at the Callaway Classic in LaGrange last weekend, winning three but dropping two to improve their record to 4-3.

All three losses for Bainbridge this season have been decided by one run in the final inning. Hovering that close to an undefeated record has coach Christopher Bryant proud of the close games his players are competing in.

But the goal is to be on the winning side.

“All three losses that we have come from errors on our behalf,” Bryant said. “Take away those few costly errors and we are 7-0.”

Bainbridge started the tournament Friday evening with a 5-4 loss to Southeast Whitfield County. The game went to nine innings, with the Lady Cats up 4-3 going into the final inning. An error drove in the tying run and a wild pitch allowed the Raiders to take the win.

There wasn’t a hangover, however. Bainbridge immediately snapped back into action for an 8-2 win over Callaway to cap off Friday night. The next morning, the Lady Cats went on to beat Troup 6-2.

Saturday afternoon, Bainbridge had an intense come from behind to tie it up 6-6 against Central, but a run allowed in the top of the ninth and a tough run of luck at the plate gave the Lady Cats another loss.

They finished on a high note, smoking Woodward Academy 14-0. The Lady Cats outhit Woodward 12-2, with Mabry Grace Briggs going 2-for-3 with two runs and three RBIs. Abbey Gardner also had a big game at the plate, going 3-for-3 with one run and three RBIs.

“I think the tournament was a great event for us,” Bryant said. “It allowed us to go off and play teams that we normally don’t get to see and spend time as a family.”

Bryant stressed how special he felt this Lady Cats team is.

“I’ve never seen a bond between teammates like I see with these girls,” he said.

The Lady Cats played at home against Worth County Tuesday night and will play in the Watermelon Invitational in Cordele this weekend. Their next home game is next Tuesday, Aug. 22, against Valdosta at 5 p.m.