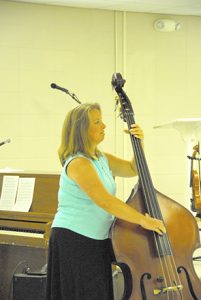 The Plath family treated members and guests of First Baptist Church to their renditions of traditional gospel and bluegrass music Monday morning.

Kim and Barry Plath are the ringleaders of the traveling family band. Together they have nine children, each with their own special talent. Ethan, 19, plays the jazz piano and self-taught himself the accordion; Hosanna, 18, plays ten different instruments and records professionally; Micah, 16, plays the mandolin; Moriah is the lead singer and guitarist for the band; Lydia, 13, plays the banjo; Isaac, 11, plays guitar and sings; Amber, 8, is currently learning to play the violin; Cassia, 6, is currently practicing her strong singing voice and Mercy, 4, sings the “Old Rugged Cross” with her sister on piano.

The family wasn’t always musically inclined, said Kim. Kim was a music therapy major at Florida State University and has been playing piano since her children were in the womb. She said since it “was a natural part of the household, the children wanted to learn.” Kim said she was excited to teach the children because it stimulates their brain in a way that other things can’t. The children are homeschooled and have to find things to entertain them beyond t.v., cellphones and video games, since those are not allowed in the Plath household. This allows the children to practice their instruments, read books, play Frisbee and use woodworking tools.

The family didn’t officially start playing in a band together until 2014. By the end of 2014, they had begun to sing at nursing homes. News of their band traveled by word of mouth and soon they were singing at churches. The family sticks to their gospel roots and often gets requests for Hosanna to perform the Orange Blossom special. They were recently invited to the Bluegrass Festival in South Carolina, where they were asked to incorporate less gospel music, but the family insisted gospel was what they knew and that was what they felt the need to perform.

The Plaths just returned from a three-week tour. When touring, they take their 15-passenger van and 12 foot utility trailer to carry their instruments. They are currently praying for a tour bus though, just to accommodate their needs better.

While they have performed for churches and senior centers across the U.S., their favorite performance has by far been the c.d. release concert last year at Thomasville City Auditorium, Kim said.

For people that missed the Plath Family Band at First Baptist Church, their schedule can be found on their website ThePlathFamily.com.

Late Thursday night, Decatur County Fire and Rescue along with Kendrick VFD were dispatched to a single car accident on... read more