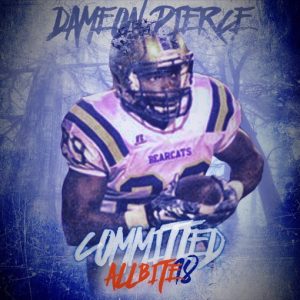 Bainbridge 4-star running back Dameon Pierce is the No. 9 back in the 2018 cycle and is expected to have a big senior year.

Pierce, the No. 9 running back in the country, was fielding offers from Auburn, Stanford, Clemson and more than a dozen other programs. He committed to Alabama in July 2016, but reopened his recruitment in May.

Since then, the 4-star running back has unofficially visited Florida twice and Auburn once.

“I’m really happy for him,” said Bainbridge coach Jeff Littleton. “I believe Florida is a good fit for him. I’m glad he has the opportunity to be in the position he is in.”

Pierce has started all four seasons as a Bearcat, combining for 4,656 career rushing yards heading into his senior year. In 2014, he scored 33 touchdowns while rushing for 2,060 yards on 308 carries.

His speed and ability to juke defenders and would-be-tacklers is a major skill that has drawn the attention of so many major D1 programs, but Pierce’s vision is his selling point. He’s able to patiently wait for holes to develop, then explode through them into the secondary.

Pierce was recruited by Florida running backs coach Ja’Juan Seider. He is the second running back to commit to the Gators this cycle after Iverson Clement in April.

Pierce’s commitment comes two weeks after the nation’s No. 2 pro style quarterback, Matt Corral, committed to the Gators. Florida currently ranks seventh nationally and second in the SEC for the 2018 class.