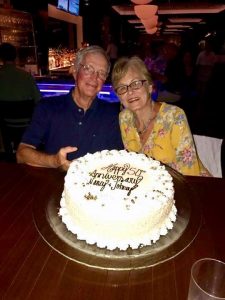 Nancy and Johnny Grimsley recently celebrated their 50th Anniversary in West Palm Beach, Florida. Their son, John and his family also joined to celebrate this milestone.

It was a hot August day in 1967 when Nancy Irene Tyson and John Uhel Grimsley III tied the knot. 50 years later, their love for each other is as strong today as it was in 1967.

Nancy and John grew up across the street from each other. They both lived on East Evans Street and Nancy would often babysit John’s four younger brothers. It was a true all American love story. He was a football player at Bainbridge High School and she was Homecoming Queen and a cheerleader. They shared an inseparable bond and both came from three generations of Bainbridge families. They began dating in ninth grade and broke off their relationship when Nancy left for college. She believed it might be difficult with John still in high school. After being apart for two years, she saw John visiting a friend at where she attended and they rekindled their love for one another.

After years together, Nancy and John were married on August 6, 1967, on what Nancy said was the hottest day of the year. Nancy had expected her brother to give her away, because of her father’s passing when she was five years old, but just weeks before the wedding he was deployed to Germany. To her surprise, though, he sent his wife and child to surprise her and her mother gave her away. Her wedding dress was borrowed from a college friend and her reception was filled with the traditional cake, punch and nuts to chow down on. She said it was such an amazing time; it wasn’t as elaborate as weddings are now a day, but it was perfect for what they wanted.

They are now the parents of two children, John Grimsley IV and Sloan. Their son describes their relationship as admirable and something he and his wife, Marcia strive for. “We just always try to be there for each and be the selfless servants my parents were,” he said.

Nancy has emphasized to both of her children that the key to a successful relationship with their family and spouse is to put God at the center of everything they do.

Their son, John, sees that as what makes their relationship so special and different from everyone else’s. He said he sees their strength with each other, with God and helping others in need.

Nancy is especially involved in helping others in need. She helped start the Friendship House of Jesus along with the Still Waters Homeless Shelter, all while teaching at Elcan –King Elementary for the past 30 years. John helps people with their medical needs, as he previously  owned Grimsley Pharmacy. When he’s not helping people at the pharmacy, he is singing to the Lord. He is a soloist in the choir at First Presbyterian Church in Bainbridge.

Although the couple seems to always be busy with their active lifestyles and various activities, they never fail to remind the other how much they care. Nancy’s favorite memory over the past 50 years was when John surprised her on an ordinary Wednesday. He told her to pack her bags and bring a jacket. “I had no idea where we were going,” Nancy said. “On the plane, he told me we were going to Maine. It was such a sweet surprise to end the summer.”

But, Nancy said special trips or no special trips, the key to 50 years of marriage is always keeping God at the center of your life.