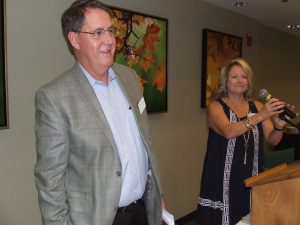 Sen. Burke had high praise for the State of Georgia on most counts, especially on their success in passing the state budget by the mandated date and making it balance. He explained that 20 percent of the states are still fighting over budgets.  But in Georgia, “the process works,” he exclaims.

He noted that the state has a lot of money, but the needs out there are greater than the funds. As a member of the Appropriations Committee, he listens to many pitches on a daily basis from groups that want to be considered for state funding.

He shared that the state of Georgia is one of eight states that maintains AAA bond rating, and the state also had 363 new projects last year, with 28,000 new jobs created.

However, the challenges remain for rural Georgia that lags behind the major cities where the growth is occurring.

The Senator spoke of three or four rural study groups who are looking for new ideas to help address those challenges, and recognizing that it is difficult to change cultures and generational lifestyles that contribute to the poverty that exists in rural Georgia. The one he is involved with addresses rural healthcare.

Some recent legislation (HB73) has occurred that allows tax breaks for those who invest in downtown businesses renovations. There will be 10 communities designated to participate initially. He is hoping Bainbridge will be one of them.

The rural hospital tax bill allows for money to go directly to local hospitals and gives the donors state tax breaks for their donations.

Sen. Burke stressed the importance of saving the local hospital as it is a necessary tool for economic development to occur.

Speaking of economic development, there is another public area of note. A rural investment tax credit for up to $60,000,000 million dollars, that is state-wide and is for economic development, not health care is considered very controversial. He said most legislators do not like tax credits cause it takes money out of their pocket to spend, “so the less we have to spend, the less influence we have with our constituents. So it is hard to get a tax credit bill through the legislature. That one did win, last minute, by one vote. I am hoping that can be another tool for small towns to use to get businesses to locate in their communities.”

Locally, our local hospital has received two grants to address what is termed “population health”. The focus is on keeping people well.

He stated that Georgia rates 49th in most studies of health outcomes. “In other words, we are sicker as a state than most other states in the country.” Most of the problem is no doubt the type of food we enjoy. But the focus is to help people practice better health.

One of those things to consider is the matter of how we handle life and death. Attention should be given to those cases that have no hope, yet are kept in hospitals hooked up to expensive equipment and receiving medicines to prolong life, such as it is. While most people would prefer to die at home, many families are intent on keeping Grandma in the hospital on life support as long as possible. This really drives up health care costs. That kind of thinking has to be had with the public and it is difficult for doctors who always want to help everyone in any way they can, he explained.

Sen. Burke expressed his thanks to the community, and especially the political leaders who stepped up and supported our local hospital to receive $2.5 million to make necessary improvements.

He touched briefly on the local college controversy concerning the changes occurring there. He allowed that we need to have Regions type education to get a start on a degree; but we also need to have technical education to provide the job skills that are necessary for economic development to occur.

Burke said he thought it was now kind of secondary, but as painful as it is, he believes it will be beneficial to our growth.

He called on all to work together to help promote Bainbridge,