Laced up and ready to play 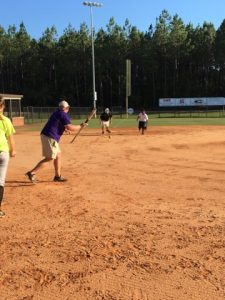 After a successful summer of softball practice, tournaments and scrimmages, Christopher Bryant said this season’s Lady Cats team is the best he’s had in his three years as Bainbridge’s coach.

“This team that I am playing with now has basically been my starting varsity, give or take a few seniors, for the last three years,” Bryant said. “It’s been a lot of growing pains, and now we are here.”

The amount of time this year’s team has spent together has done wonders for how they gel, both on and off the field. The players have each other’s backs and understand each other’s strengths and weaknesses.

Two weeks ago, the Lady Cats played in Moultrie tournament that saw them beating Lee Coun-ty and Colquitt County. The wins got the girls excited and showed firsthand what their hard work meant against traditionally strong teams.

“The girls got excited and I think they are finally grasping what they can do as a team,” Bryant said. “It’s been a huge impact because they’ve had that time out there. They’ve had a year with 5A ball with some of these good schools. I think it has made a big difference.”

Starting in the circle this season are Abigail Gardner and freshman Lexi Delbrey, who Bryant is excited to see in action.

“She is a ball player,” Bryant said about Delbrey. “She is hard-nosed, she fits in with these girls and she is going to give you everything she has got when she is in.”

Delbrey and Gardner both also play first base, making it easy for them to rotate positions when needed. The pitching, along with strong infield play from players like C.T. Jones, Makayla Ham-ilton and outfield play from Desirae Beechum, Mabry Grace Briggs and Lauren Howard has Bryant looking forward to the season

The defense is as sound as it’s ever been, he said.

“Just with the way these girls have each other’s backs,” Bryant said. “That’s what it’s all about. So I think we will be okay defensively, if we stay healthy and continue to swing it like we have.”

Delbrey has combined for 15 home runs this summer in school ball and travel ball. Her ability to hit homers along with strong short game batters like Briggs and Beechum makes it easier to score runs, Bryant said.

As far as goals this season, the Lady Cats won’t stop until they have a Region Championship.

The Lady Cats start their season against Colquitt County next Tuesday, Aug. 8, at 5 p.m. Their first home game is Tuesday, Aug. 15, against Worth County at 6 p.m.