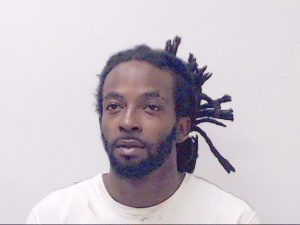 Officer Myers saw Florence pull his vehicle out of a known drug area and begin driving slowly past his parked patrol car. Myers had his car window down and smelled the scent of marijuana as the car passed by. Myers began to follow the car and turned north on West Street. The car then overtook both lanes on Shotwell Street, where Myers decided to conduct a traffic stop.

The car did not initially stop, but started rolling slowly. Myers said he believed this to be an indication the driver and the passenger might be trying to figure out what to do and how they were going to play this. The car finally came to a halt on Hall Street.

Myers asked the driver, later identified as Florence, to roll down his window. Myers said he could instantly smell the fume of marijuana. Myers then called for backup as the driver gave a license that was not him.

As Officer Hayes was pulling up on scene, Edwards hopped out of the car and ran north on Hall Street. Officer Hayes jumped in his patrol car to follow him up Hall Street and then pursued him on foot, after Edwards cut through someone’s yard. While looking back to see how far Hayes was behind him, Edwards lost his balance hopping over the fence and was tackled to the ground by Hayes after a struggle.

While Hayes was pursuing Edwards on foot, Myers had called for backup and they had begun detaining Florence. In the midst of detaining him, a bag of marijuana fell out. Florence was then arrested, along with Edwards. Edwards was found to have 19 baggies of what is suspected to be cocaine, but possibly powdered meth or flaka on him, 2 bags of marijuana, and an empty pill bottle on him.

After booking the two men, Hayes and Myers became suspicious of the empty pill bottle and were concerned the pills may have come out during detainment. When Hayes detained Edwards, the two were near a church and Myers said “he would hate for kids to find them when they are coming from Sunday school and think they were candy.” The two decided to do an extra sweep, and were surprised to find a large, clear bag stuck in the branches of the 10 ft. tree on the property. The bag contained over 45 pink tablets of ecstasy. Myers described it as a “pretty large hit.” He also said “they may have never known Edwards was selling had it not been for Hayes who helped locate all the narcotics.”