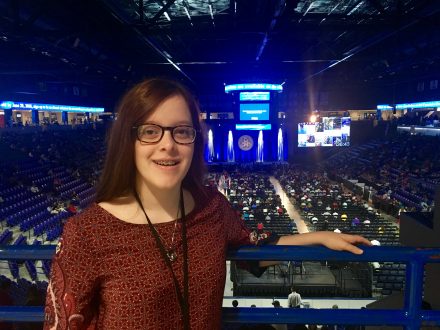 Ruth Carraway smiles on the balcony at the Congress of Future Science and Technology leaders at the University of Massachusetts.

Sixteen-year-old Grace Christian Academy student Ruth Carraway recently got to experience a self- proclaimed “nerd’s paradise” as a delegate at the Congress of Future Science and Technology Leaders in Massachusetts.

Carraway received an invitation in the mail inviting her to the University of Massachusetts, Lowell for this three-day event. Award-winning inventors, scientists and authors mentored the delegates. In addition to that, the delegates also had the opportunity to meet the keynote speakers for the event in between sessions.

One of Carraway’s favorite speakers was Tim Webber. Webber was the winner of the 2013 Academy Award for Best Visual Effects for his work in the film “Gravity.” He also showcased his work in other films such as, “Avatar,” “The Dark Knight” and “Harry Potter and the Goblet of Fire.” Carraway said she enjoyed his speech because when she attended the session she was interested in pursuing a career in special effects. After hearing about the business aspect of the career, Carraway decided special effects might not be her desired career path. However, she is glad she could hear about every side of the career so she could make that decision for herself.

While special effects did not pan out the way intended, Carraway found a new interest, which became one of her favorite parts of the trip.  “I really liked meeting other delegates and hearing about what they wanted to do in the future,” she said. “It helped me narrow down my path.” Carraway has developed an interest in developing technologies for disabled people or people in long term care.

Sean Stephenson, a severly handicapped man who worked with Bill Clinton in the White House, may have sparked Carraway’s interest. Carraway said Mr. Stephenson had a rare bones disorder and was 3 feet tall and was confined to a wheelchair. “He had a larger than life personality,” she said. “I think it was really interesting how he worked in the White House with his condition.”

Carraway hopes other students her age will take advantage of this opportunity, even if they are not interested in Science and Technology. She said they also offer a delegate position for future medical leaders. All delegates are inducted into the honorary organization, which for Carraway was The Society of Torch & Laurel. Carraway encourages everyone to really focus on their grades, PSAT and PACT scores, which is where she believes the Congress looks to find their future delegates.