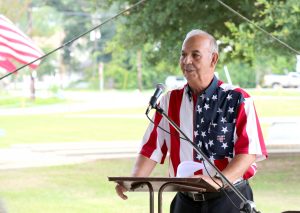 Mayor Hadsock welcomed all those that took the time to come celebrate the American flag and gave special recognition to the Dignitaries present, and added we are all dignitaries just for being here and honoring our veterans and the flag. There was a wonderful attendance this year, along with a cool breeze, no gnats, and no train “announcing it’s coming through Climax” during the program.

Mitchell Faircloth, founder & President of “Love for Our Vets”, announced the names of the Climax Soldiers who made that ultimate sacrifice.  He also asked if anyone knows of any other Climax soldiers who gave their life for our freedom to please call out their names.

The Bainbridge High School Junior ROTC retired the old flags and replaced them with new flags.  Sam Sirmons then lead the singing of the National Anthem, “The Star Spangled Banner.”  Everyone present sang proudly raising their voice with pride for our flag, our men and women in the military that were so willing to defend it and those presently defending our flag and our freedom.

Senior Master Sergeant Scott A. Morehouse, Air Force Junior Reserve Officer Training Corps (AFJROTC) Aerospace Science Instructor at Bainbridge High School, introduced the guest speaker, Senior Master Sergeant Retired Frank Geslak.  Sgt. Geslak discussed our Country’s history and the history of Our Flag.  He asked everyone to listen to the words of the past and to know, without them we would not be here today.  He stated, “We the People of the United States.”  We all should know the Constitution of the United States of America 1789.

The City of Climax wants to thank all those that were in attendance and those that participated in the 29th annual Flag Day Celebration.  If you were not able to be there, we hope to see you there next year.