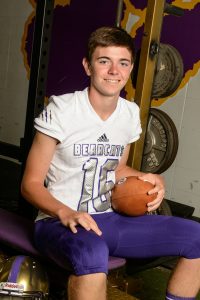 Mark Loeffler stepped up in a big way during the 2016 season when quarterback Brett McLaughlin was injured for a couple of games. Loeffler got enough experience at quarterback to compete for the starting position this summer. Combined with new offensive coordinator Mike Harville, he is excited for the possibilities the Bearcats will have in 2017.

“Honestly, I’m really just looking forward to the new stuff we are getting with the new offensive coordinator,” Loeffler said. “It’s similar to what we had last year, but mixing it up a little bit more.”

Loeffler’s goals in 2017 are to be a good leader for the team and a role model for the younger players. A Region Championship is also on the list, he said.

Loeffler transitioned to quarterback in 2015. He also contributes some on special teams. 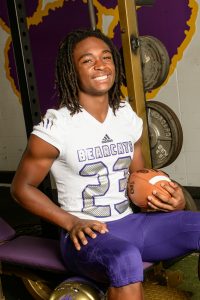 Zyon McGee started in 2015 and 2016 as a wide receiver, but he really began to find his niche on defense last season as safety. He made 31 tackles and two interceptions, one of which that was returned for touchdown.

This season, he will lead the Bearcats’ backfield as safety while also working as an inside receiver and fullback.

“I am looking forward to seeing how the chemistry of the team is going to work,” McGee said. “I know we have a lot of talent this year and see how we work together as a team. We have more talent and speed and we have more people that can cover on defense rather than last year. I think offense and defense will be better this year.”

McGee’s goals for this season are for the team to play together as one. He also is set on the goal achieving a 10-0 record and a Region Championship.

“My personal goal is to be All State or All American at safety,” McGee added. 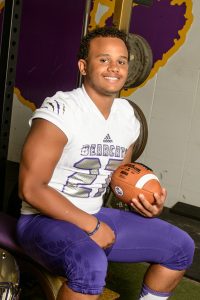 Trey Storey returns as a key starter on defense after recording 53 tackles in 10 games during the 2016 season.

Winter workouts, spring practice and summer workouts are all working to make the team better, according to Storey

“We are going through the process, becoming one on defense,” Storey said. “We are working harder and trying to get faster.”

This season, Storey is looking for the team to realize its goal of winning another Region Championship like in the 2015 season.

“Or something even better,” he added.

Storey has been playing since elementary school. He helps anchor a linebacker corps with high expectations on defense. 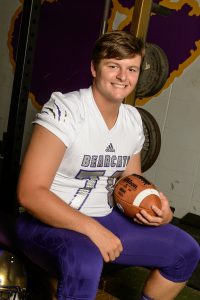 After a solid start at center in 2016, Hudson Barber will return for one last season snapping and blocking for the Bearcats.

He’ll be protecting one of his closest friends, Mark Loeffler at the quarterback position. In fact, building stronger bonds with Loeffler and his other teammates is one of the things Barber is most looking forward to this season.

“You make so many friendships playing football,” Barber said. “Being with your friends in the locker room. It makes you closer.”

Barber said there is one big goal he will try to achieve this season: go all out on every play.

“We have time before the season, and we are throwing some new stuff in there,” Barber said about getting Harville’s offense up and running.

Check back in next Wednesday’s edition for more senior Bearcat spotlights.