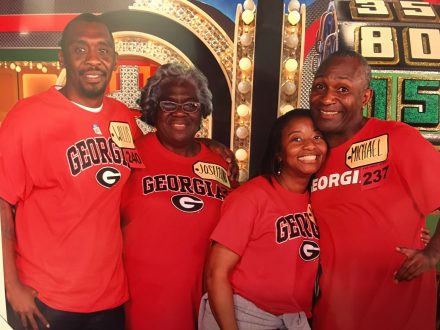 Willis Biggles, Jr., Josephine Biggles, Mariama Myers and Michael Biggles smile on the set of the Price is Right in April. the episode aired on Friday.

Josephine Biggles got a surprise when she went on her annual visit to Long Beach, California, to see her sons in April.

Michael D. Biggles and Willis Biggles, Jr. took their mother to the April 3 taping of The Price is Right in Los Angeles.

The Price is Right is a gameshow that provides contestants with a wide variety of contests and challenges centered around one idea: correctly naming the price of everyday retail items.

While the Biggles and Michael’s girlfriend, Mariama Myers, were waiting in line at CBS Studios, a casting director interviewed the four of them. He determined Michael was one of the lucky viewers that would get to “Come on down!” and participate for a chance to win prizes.

Michael won six watches and a trip for two to Toronto, Canada, which the family intends to enjoy together. Due to signed confidentially agreements that the family signed, they were not able to discuss Michael’s winnings, but they were able to let everyone know that the episode they were on would air Friday.

During the taping, Michael even gave a shout-out to Bainbridge

“This was one of the most exciting visits that will be added to my memories of trips to California,” Josephine said.

The Biggles family said one of the highlights of the taping was getting to meet The Price is Right host and television star Drew Carey.

They added that they felt “truly blessed.”

Peter Pan has long been a favorite story and musical play for young and old alike since it first opened... read more