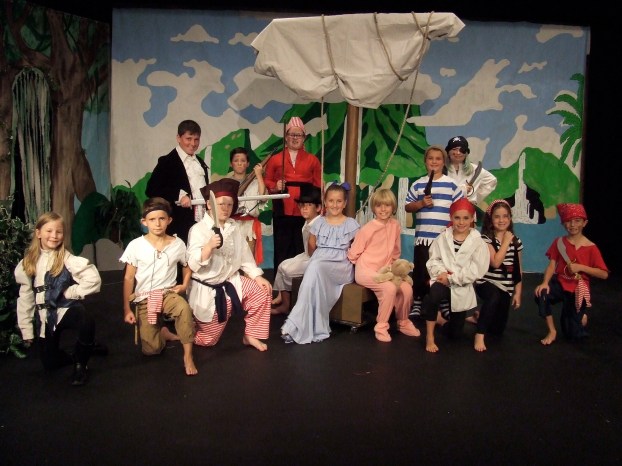 Peter Pan has long been a favorite story and musical play for young and old alike since it first opened on Broadway in 1954, starring Mary Martin as Peter Pan. It continues to be a hit with each new generation, as those who attend the BLT Class Act production, “Peter Pan – A Musical Adventure,” this weekend will realize.

The show opens Friday, June 16, and Saturday, June 17, at 7:30 p.m. with a Sunday, June 18, matinee at 2:30 p.m. Rumor has it that tickets are selling fast. Go online to www.bainbridgelittletheatre.com to order tickets.

There are 47 youth, ages six to 12, who are excitedly taking on their roles as Indians, pirates, mermaids and other supporting characters in the classic play directed by Rachael Crager. Musical direction is by Leigh Powell and those attending will come away whistling or singing some of well-known hit songs, “I’ve Gotta Crow,” “Never Never Land,” and, of course, “I’m Flying.”

The leading role of Peter Pan is played by 10-year-old Addison Hill. When interviewed by Jill Holloway, Addison said she has been acting on stage since age two. This is her second play at BLT. She tried out for the roles of Wendy, Capt. Hook and Peter Pan. “My most exciting part is the fight scene when Capt. Hook thinks I’m dead; but I’m not, and I fight him.” She claims the most difficult part for her is singing the high notes in the first scene.

The Bainbridge Little Theatre Class Act summer series are aimed to expose youth to the theatre and provide practical training in the theatre arts. A second session called Teen Class Act will begin rehearsals June 19 for Aida, to be performed July 14-16.

A vehicle crashed through the front of the Inland convenience store on Shotwell Street around 6:15 p.m. Wednesday. The car... read more